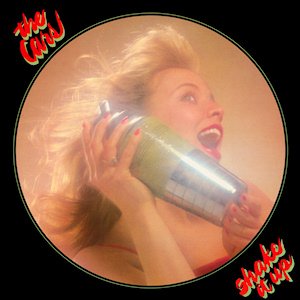 Somewhere in here the 70s finally petered out and 1980 rolled around. I was 12. When Scary Monsters came out, it got a lot of play on my local rock radio station, which also prominently featured the Cars. At that point I knew who David Bowie was, but I didn’t know who he was; I had not yet learned to distinguish his voice (the original) from that of Cars vocalist Ric Ocasek (the acolyte). I may actually have thought that “Ashes to Ashes” was a Cars song, may David forgive me.

So in some parallel universe, Scary Monsters was the first album that I bought and really listened to as a whole piece of work. But in this one, it was Shake It Up. It’s a pretty good record. In fact I’m listening to it right now and it holds up. Despite what the cover art might indicate, this is not a party album; aside from the title track, it’s mostly pretty dark. In particular, the B side has three songs that reflect the influence of Low and that I think David would have been proud to have written. “A Dream Away,” “This Could Be Love,” and “Maybe Baby,” are all cold, droning, majestic sound sculptures with odd, impressionistic lyrics.

When I was acting in plays in high school, before performances I would go to a dark room and listen to the B side of Shake It Up. I felt like it opened up my mind a little bit, took me to a creative place. I don’t think I was a very good actor, but that’s not the Cars’ fault.

Ocasek has a very distinctive voice, but he split vocal duties in the Cars with bassist Benjamin Orr. Orr was sort of the pretty boy of the band, providing a visual foil to the bizarre-looking Ocasek, who I described in another blog post as “a looming insect-man with oddly familiar eyes.” (I think I nailed that one.) Unfortunately Orr passed away a few years ago, so on the reunion album Move Like This Ric has to sing them all. (Move Like This, by the way, kind of shocked me. I didn’t expect much from a Cars album in 2012, but it was really quite excellent.)

The Cars also had a flashy but tasteful lead guitarist in Elliott Easton, but their secret weapon was keyboardist Greg Hawkes. His distinctive electronics gave the Cars their signature sound and on “This Could Be Love” he has a synthesizer solo that is the nerd equivalent of shredding.

After Shake It Up, I went back and got the Cars’ three previous albums (The Cars, Candy-O, and Panorama). I love them all, and Candy-O is arguably the Cars’ best album; but Shake It Up is the one that means the most to me, and I still enjoy it thoroughly, from the click-track that opens “Since You’re Gone” to the slow-rolling fade of “Maybe Baby.” But more than anything, the Cars were a gateway drug, a first tentative step into a new and strange and exciting world.