It’s a little terrifying to consider how much money is represented here, not to mention all the so-called “convenience fees” extorted from me by those bastards at Ticketmaster. Today, all I have to show for it are ticket stubs and memories, many of the latter fuzzy at best. But I have no regrets, except maybe not taking earplugs to that Thinking Fellers show, which I think caused about 20% of my rock’n’roll-related hearing loss. Or if I have regrets, they’re shows I didn’t see. Like the Lou Reed show that got cancelled because of the L.A. riots — you know, the one we had fourth-row tickets for. And in the words of the Butthole Surfers (seen three times that I can remember): “It’s better to regret something you have done than to regret something you haven’t done. And by the way, if you see your mom this weekend, be sure and tell her…SATAN!”

END_OF_DOCUMENT_TOKEN_TO_BE_REPLACED

Listening to some old mix tapes in the car lately, I’ve been reminded of the existence of a band called Sammy. (Not to be confused, as Amazon did, with Sammy Hagar or Sammy Davis Jr.) The band Sammy were a couple of smartass eggheads who back in 1996 made an album called Tales of Great Neck Glory. A fantastic album that never found an audience, and thus today can be had for a penny plus shipping.

Much like, say, Elastica, Sammy never invented anything; instead they distilled a long list of influences with such skill and aplomb that they transcended mere imitation. The odd tunings, deadpan vocals, and hyperclever lyrics point to a strong affinity for Pavement, but at other times Sammy calls to mind Sonic Youth, the Velvet Underground, David Bowie, Brian Eno, the Cars, Wire…in truth, just about every touchstone in the history of cerebral rock music. And they sound damn tidy doing so.

The dream is over 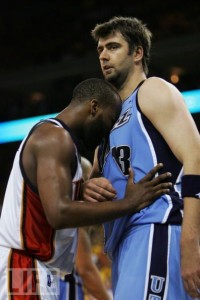 An article about the death today of Rev. Jerry Falwell contained the following line:

The founder of the Moral Majority was discovered without a pulse at Liberty University.

To which the natural response is, this is news? Jerry Falwell was always a man without a heart. A truly despicable human being who presided over hypocritical moral witch hunts with a shit-eating grin plastered on his evil doughboy face. I am not a hateful person, but I will gladly dance upon his grave singing “Hallelujah,” just as soon as they dig one.
END_OF_DOCUMENT_TOKEN_TO_BE_REPLACED

These are the times that try men’s souls (and some women’s): The Warriors find themselves down two games to none heading into tonight’s Game 3 in Oakland. Call it what you will — crucial, pivotal, decisive, essential, a must-win — this is flat-out A Big Game. Win and we’re back in business; lose and you can pretty much forget about it.

Not that I’m worried. I feel serenely confident that all will transpire as it must, and grateful for the privilege of experiencing this present moment as a conscious being here on planet Earth. I ask for nothing more than a good, clean, entertaining game. That, and maybe a few calls from the referees to make up for all the ones that went against us in Utah. Is that too much to ask? Am I talking to myself here? In the immortal words of the Butthole Surfers, are you freaking with me?