It’s been awhile since I cleaned out my spam comments, but there were some nice ones this time. For instance this one from longtime correspondent “Senethra”:

Manipulation and furry has no boundaries upon selfishness. Bold talking of bullshiting . Just F- ing get to f-ing gether already. Spendrella and the green wolf, Damn. I dont need this shit in my back yard. How many black chocolate elgance God wonderful and fearly created without remorse. Im not the damn milk maid. Using and abusing people is agianst the laws of righteousness. Demons, vampires and dangon slaughteres. I live to love openly and passionately for the things th\at nature me back. Deception can sometimes win if the idiot doesnt pay full attention to its were abouts. Direct quotation marks and lots of exclamations. The pragnent women laying in blood because she was stupid not in LOVE. There is no way it could be right and YOU know the *&%^ is FACT, you selfish ass mother fuckers.

Or this one, which is apparently trying to sell me British prostitutes:

Unquestionably believe that that you said. Your favorite justification seemed to be at the internet the easiest thing to be mindful of. I say to you, I certainly get annoyed while people think about worries that they plainly don’t realize about. You managed to hit the nail upon the top and also outlined out the entire thing with no need side effect , people could take a signal. Will probably be again to get more. Thank you Magic Escorts, 30 Sutherland Street, Westminster, London, SW1V 4LA, 020 3011 1712

This is not the first time that I’ve been spammed with the phrase “You managed to hit the nail upon the top.” Is this perhaps something English people really say? That would be adorable!

This one was posted to my entry on Aloe Blacc. The writer seems quite exercised about something, but I have no idea what they are talking about:

NOOOO!!! NO SHOW ON NICK PLEASE NO!!! It will RUIN their personalities and they won’t be the funny and at times perverted guys that directioners know and love!!! Big time rush is on Nick let them be American show biz puppets and kindly live our boys out it please!!

Hi Rod, loved the live show tonight. Glad you found a great place to move to in Phoenix. That is beiggr and cheaper. I agree with you on Kobe and the Lakers. I hate to see Phil Jackson go he is great coach. Love your latest scene, you Mason Star flip flopping each other. I love all your scenes and your the greatest. Have a great week.

But this is my favorite, sucker that I am for all things in list form:

Mistake? Maybe, maybe not. “Accident,” maybe. It makes me think for some reason of the last words of Dutch Schultz…which are always worth thinking about.

The Old Man pointed out to me that though my last post contained a photo of Rodney King adorned with the words “Can’t we all just get along?,” in the text I shortened the quote to “Can we all get along?”

There is a reason for this. Like many people, I’ve been carrying the quote around in my head all these years as “Why can’t we all just get along?” But as I discovered to my chagrin yesterday, if you go to the video tape, “Can we all get along?” is the actual phrase. This is too bad, because while the former is more pleasing to the ear and the sensibility, all the latter has going for it is that it is accurate.

If you wanted to get real semantic about it, you could read things into the addition of the words “why” and “just,” and the inversion of “can” to “can’t.” I suspect that it is just normal fact slippage, similar to the way many people now believe that Sarah Palin actually said she could see Russia from her house. (Sarah has said a lot of dumb things in her time, but that was not one of them. She did cite the proximity of Russia to Alaska as proof of her foreign policy credentials — that’s bad enough — but “I can see Russia from my house” is pure Tina Fey.)

While we’re at it, did you know that Hermann Goering never said “Whenever I hear the word ‘culture’ I reach for my revolver.”? According to The Wikipedia:

Does that now make it OK for me to paraphrase this line in polite company, by way of explaining how I feel about Facebook? Or should I refrain? 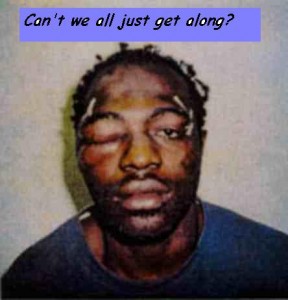 I won’t lie to you: It’s nice to be back where electrical outlets are shaped normally and people have the Courtesy to Speak English. Though to be fair, many people in Austria — where I just spent eight busy days — did have the Courtesy, or at least the capacity; it’s just that I was afraid to ask them to because I have a complex about being a bumbling monolingual American.

I may write at length about this trip at some point. Then again I may not, for the same reason that I didn’t write while I was there: there was/is too much work to do. So for now, I will just summarize briefly what I have learned: