Apocalypse Now is not exactly loaded with sentimentality, and one of the rare moments of overt — you might even say cheap — sentiment comes when Clean is killed by a tracer round fired from the jungle. At the moment of his demise he is listening to an audio letter sent by his mother, whose voice can be heard waxing optimistic about future grandchildren as her son’s corpse lies sprawled on the deck. (Kudos, by the way, to Hattie James, who I’m told is Larry Fishburne’s actual mother. She does an amazing job of sounding just like somebody’s mom would on a tape like this — stilted cadence, self-conscious laughter, and all.)

Some might call this instant (or at least rapid) karma, since it was Clean’s itchy trigger finger that set off the sampan massacre. Others might just say, eh, sometimes you eat the bar and sometimes the bar eats you. What you think probably says something about how you view the workings of this universe we live in. I prefer to leave it up in the air, which definitely says something about me.
END_OF_DOCUMENT_TOKEN_TO_BE_REPLACED

Fresh from the nightmare of the sampan, the boys on the boat find themselves in a different kind of nightmare at Do Lung Bridge. This time it’s dark and has a psychedelic quality; we are invited to view the proceedings through the eyes of Lance, who has indulged in that last hit of acid he was saving for a special occasion.

Not everyone would consider passing through a remote army outpost that is a favorite and frequent North Vietnamese target a special occasion, but Lance and his ilk are a breed apart. They like to take hallucinogens under what most people would consider the worst possible circumstances. The idea, I guess, is that if you are going to endure a harrowing, life-threatening ordeal, you might as well make it seem as much like a dream as possible. It should be less frightening that way, in theory at least.
END_OF_DOCUMENT_TOKEN_TO_BE_REPLACED 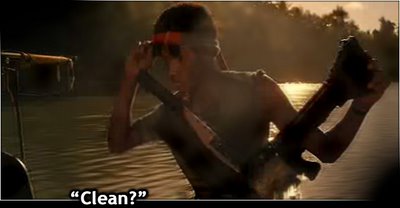 Likewise, the sampan incident is a turning point in Apocalypse Now. It is a tragedy that could easily have been avoided; Willard asks the Chief to ignore protocol and keep moving, but Chief insists on searching the boat in case it is carrying supplies for the Vietcong. This seems to be part of a pattern of Chief making perfectly reasonable decisions that have disastrous results, not unlike Captain Dallas in Alien.
END_OF_DOCUMENT_TOKEN_TO_BE_REPLACED