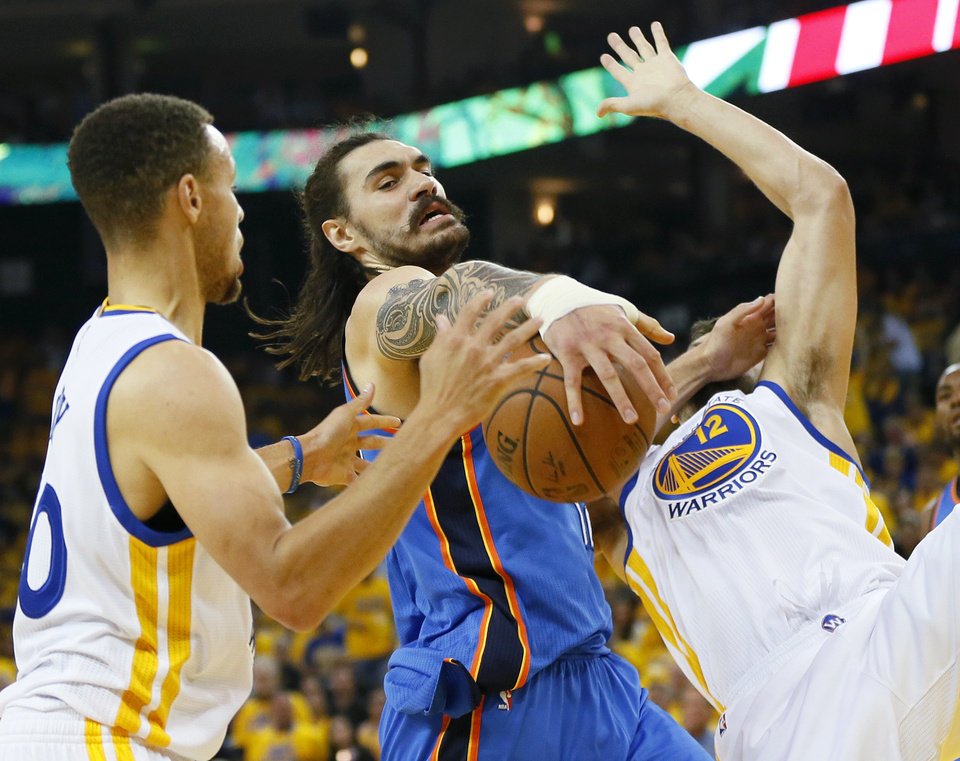 I found this picture on the website NewsOK.com, which captioned it ‘Oklahoma City's Steven Adams (12) is fouled by Golden State.’ Em, wrong on several levels. But it was that kind of night.

For some reason, the Warriors’ losses are always a lot less fun to write about than their wins. But this is the task I have set for myself, so here we go.

Last night was Game 1 of the Western Conference Finals against the Oklahoma City Thunder. It started well, with Andrew Bogut laying a hard foul on Russell Westbrook in the first minutes of the game. I don’t condone violence, but someone had to set the tone for this series, and Bogut was the guy to do it. The Warriors looked sharp for the whole first half, both on offense and defense, and it ended more or less as it had begun — with Klay Thompson sprinting to try to intercept a pass intended for Westbrook and crashing into him, sending both of them sprawling to the hardwood.

In the third quarter the Thunder appeared to be on the ropes, but then TNT flashed a graphic showing that Thompson was outscoring Westbrook 31–3. I don’t know how Westbrook could have known about this, but it seemed to set him off; all of a sudden he went on a scoring flurry and the Thunder began to close the gap. There was an ugly stretch spanning the late 3rd and early 4th where the Warriors missed some shots they usually make, committed a few turnovers, then started launching high-degree-of-difficulty shots to try to stop the bleeding. Of course, if the W’s make those shots — as they did in the first half — I’m singing a different tune. But that’s not how it went.

The Dubs ended up down 105–100 with 22 seconds left. After Andre Iguodala hit a layup to cut the lead to 3, Westbrook dribbled hard past halfcourt and came to a quick stop to call a timeout. In the process he quite obviously dragged his pivot foot right in front of the referee, leading both Steve Kerr and myself to frantically wave our arms in the motion that indicates traveling. But no call was made, and quite frankly, Bob, the Warriors should never have put themselves in position to be crying for a call in the first place. The Thunder deserved to win this one, and you have to respect the grit and stick-to-itveness they showed.

So now we have a series on our hands. Game 2 is Wednesday, and it should be a good one.