The Redness and the Horror

Edgar Allan Poe’s “The Masque of the Red Death” has never been more resonant than it is now, in the year of Ebola hysteria.

Blood was its Avatar and its seal –the redness and the horror of blood. There were sharp pains, and sudden dizziness, and then profuse bleeding at the pores, with dissolution. The scarlet stains upon the body and especially upon the face of the victim, were the pest ban which shut him out from the aid and from the sympathy of his fellow-men.

So this being All Hallows’ Eve, why not give it a read, or better yet a listen. I’ll give you two versions to choose from. Either the classic, classy British-accent version by Basil Rathbone:

Or the extra-twisted version read by old Uncle Bill:

Some of My Favorite Shows (Part 2) 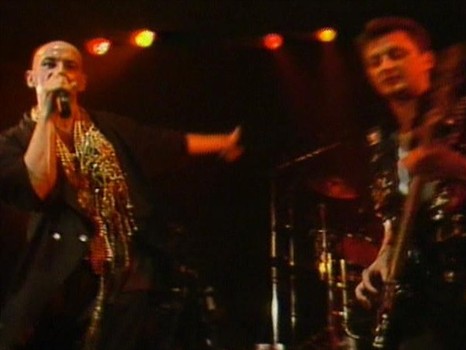 This picture is almost as blurry as my memory.

This one is a little tricky, because my memories of the show in question are very vague. You might ask, as my friend TV did, why I want to write about a show I barely remember. It’s a good question, and the answer is that I have fond feelings for the band, the time period, and the people involved, and enjoy thinking about all of them.

The band was Shriekback, the venue The Stone in San Francisco, the time late 1985. I was attending UC Santa Cruz at the time, and had gotten into the habit of reading the SF Chronicle’s Sunday arts and entertainment section (known to all Bay Areans as the Pink Section). When I saw that Shriekback — one of my favorite bands then and now, and one rarely seen on U.S. soil — was playing in S.F., I was determined to be there. I convinced a group of friends to make the trek, and for transportation we enlisted a hallmate who was not a favorite person of ours but had a car. It was not a proud moment, but sometimes you do what you have to do.
END_OF_DOCUMENT_TOKEN_TO_BE_REPLACED