The third installment of anything is usually a mistake (see: Godfather III, Spider-Man 3, Return of the Jedi, etc.), but I can’t help myself from taking one more trip back to the place where I grew up. This suite of songs continues more or less on the theme of the previous installment, i.e. disconnection, alienation, getting lost, etc.

As so often happens, this thing started out small and rapidly grew out of control. But it certainly sounds good to me. You may feel similarly, you may not, how am I to know? In any case, here it is:

Playlist and notes after the jump. END_OF_DOCUMENT_TOKEN_TO_BE_REPLACED 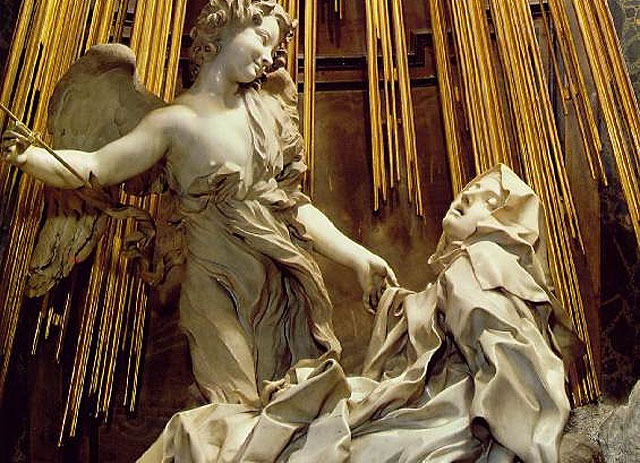 “I saw in his hand a long spear of gold, and at the iron’s point there seemed to be a little fire. He appeared to me to be thrusting it at times into my heart, and to pierce my very entrails; when he drew it out, he seemed to draw them out also, and to leave me all on fire with a great love of God. The pain was so great, that it made me moan; and yet so surpassing was the sweetness of this excessive pain, that I could not wish to be rid of it. The soul is satisfied now with nothing less than God.”
— Teresa of Avila

Begin: Page 258 (“White halogen off the green of the composite surface, the light out on the indoor courts…”)
End: Page 298 (“Of particular interest are the eyes.”)

Introducing a new feature this week: the Footnote Profile, a preview of the number and length of notes in the upcoming stage to help us get mentally prepared. This week’s is moderate to annoying, with a bunch of shorter ones and one real humdinger. In recognition of this, along with a general feeling of mercy and benevolence brought on by balmy weather and other euphoriating factors, this week’s page count is short.

I’m impressed by the fortitude of the remaining Marchers and feel like we turned a corner this week where it actually feels possible we’re going to conquer this thing. I admit I was having my doubts there for a minute but at the moment I feel…in the immortal words of HST…just sick enough to be totally confident.

I love this story

PARIS (Reuters) – A 15-month-old baby girl survived a fall from a seventh-floor apartment in Paris almost unscathed after bouncing off a cafe awning and into the arms of a passer-by, police said on Tuesday.

The infant had been playing unsupervised with her four-year-old sister on Monday when she somehow fell out of the window, a spokesman for local city police said.

A young man saw the baby starting to fall and alerted his father, who raced to get into position, arms outstretched, to catch her after she hit the awning, the daily Le Parisien reported.

“He must have played rugby for years to have developed reflexes like that,” a bystander who saw the incident told the paper.

Police said the girl appeared to have no serious injuries and was under observation in a nearby hospital.

The owner of the cafe, located at the foot of the block of flats in the northeast of Paris, said it was a stroke of luck he had decided to leave the awning open that afternoon.

“I usually close it to stop it catching fire as people tend to throw their cigarette butts onto it,” he told the television station i-tele.

The police spokesman said the circumstances behind the accident were unclear. “The parents were absent, and it’s a bit difficult questioning the two girls, given their age.”