Stage 17 was the big showdown on the Col du Tourmalet, and it was a cold, rainy, foggy day. The images on the TV were dreamlike and impressionistic, with the raindrops on the camera lens giving everything a sort of Monet quality. And then, out of the fog, there are two figures, one in white and one in yellow: Andy Schleck and Alberto Contador, having left everyone else behind and shooting to the top of the mountain.
END_OF_DOCUMENT_TOKEN_TO_BE_REPLACED

The Tour is taking the day off and this reporter is quite busy, but I did enjoy reading about an incident that happened the other day between two members of the AG2R team. Nicholas Roche, the team leader, had a flat tire about 6k from the top of the Port de Balés. He asked his nearest teammate, Frenchman John Gadret, for his wheel, which is a fairly routine request. But, says Roche,

I couldn’t believe what happened next. He just shook his head and said “Non.” At first I thought he was joking, but soon realised he wasn’t when he kept riding past me.

This is even more amusing if you picture Gadret giving a classic Gallic shrug of the shoulders before leaving his leader in the lurch. Roche, who is Irish, apparently has a bit of a temper:

If John Gadret is found dead in his hotel room in the morning, I will probably be the primary suspect. But after today’s stage, as he sat beside me on the team bus I had great difficulty in not putting his head through the nearest window…. Although I wanted to smash his head in, and had visions of a baldy French climber exiting through the windscreen, I let Vincent do his job as team manager and said nothing. I got off the bus as quickly as possible and travelled to the hotel in the team car. I couldn’t stand to be near him. I will have to keep my hands in my pockets at the dinner table.

Fantastic, no? There have been some subsequent reports that Roche and Gadret made up – and, for that matter, that Andy Schleck and Alberto Contador have reached some sort of rapprochement – but where’s the fun in that? Hate, bitterness, feuds, rivalry; these are the things I’m looking for. This is what will make tomorrow’s crucial Stage 17 something special. Look in your hearts, boys, and remember everything you have to be angry about. 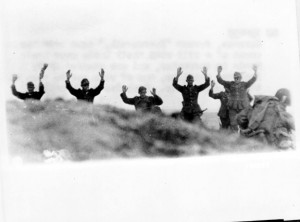 Announcer Paul Sherwen agreed with Lance, and he got into a surprisingly heated disagreement with his partner Phil Liggett, who defended Contador. Normally those two guys are in complete accord about everything. At one point Sherwen even brought up the fact that Liggett had never ridden in the Tour, which was a low blow if you ask me. Friendships are being tested all around; supposedly Contador and Schleck had been friends up to this point, and even once vacationed together. I don’t think that well be happening again anytime soon.
END_OF_DOCUMENT_TOKEN_TO_BE_REPLACED 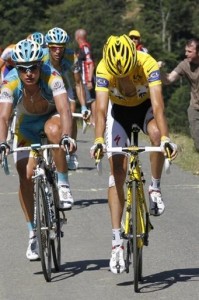 Though this might seem simple and straightforward to you stupid Americans, it is anything but. Cycling fans all over the world are debating intensely whether Contador violated the Code of the Tour by taking advantage of Schleck’s mechanical problem. According to tradition, you’re supposed to wait for another rider who’s had a crash or a bike issue; it’s a question of honor, and there are many relevant examples in Tour history. The question is, did Contador transgress the unwritten rule?
END_OF_DOCUMENT_TOKEN_TO_BE_REPLACED

Five years ago, Stage 14 of the Tour was a potentially pivotal stage that finished with a climb to the ski resort town of Ax-3 Domaine. Today, same deal. Time does indeed run in circles.

As in 2005, there were a number of moments today when it looked like the shit was about to hit the fan, but in the end nothing changed much. Andy Schleck and Alberto Contador remained more or less joined at the hip throughout the day, although on the last climb Contador kept putting in little bursts of acceleration to see if Schleck could stay with him, which he could. (Contador is apparently not familiar with the wise words of the Good Doctor: “Avoid those quick bursts of acceleration that drag blood to the back of the brain.”) At one point Paul Sherwen accused Contador of putting in “a very violent attack,” which is a funny way to talk about a guy riding his bike really fast, but that’s the terminology of cycling.

Stage 14 was the exact mirror of Stage 8, where it was Schleck doing the testing. It’s become pretty fascinating to watch these two guys, who appear to be perfectly evenly matched. Schleck lost to Contador last year by 4 minutes and 11 seconds, but he is still a growing boy, barely 25 years old. At the moment he leads Contador by 31 seconds, but in truth that is a dead heat if not an advantage for Contador, who is a much better time trialist. The last meaningful stage in this year’s Tour will be a 52-km time trial in which Contador is a mortal lock to beat Schleck; the only question is by how much.

This means that Andy will want to take some more time from Alberto in the mountains, which is a very tall order. He will really miss his big brother Frank, who was the only teammate capable of keeping him company on the climbs. Contador has two such guys in David Navarro and Alexandre Vinokourov, and that could end up making a big difference. Or not. There’s a lot of talk in the Tour about the intricacies of strategy, but in the end it comes down to who is the strongest, physically and psychologically.
END_OF_DOCUMENT_TOKEN_TO_BE_REPLACED 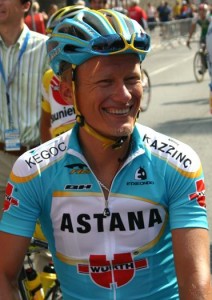 It was a great day in the Tour if you love sunflowers. The countryside of France is saturated with yellow in the summertime, which I suppose must be why they chose yellow for the leader’s jersey in the first place. At times today the cyclists seemed like a backdrop for the scenery, and this is a representative sample of Phil Liggett’s race commentary:

There are 19 mills in this region – 9 are windmills and 10 are water mills. And it really is very beautiful indeed.

It seemed like a downright pleasant day to be a Tour rider. Several times we were treated to the weird sight of Lance Armstrong actually smiling and enjoying himself, despite – or maybe because of – the fact that he is increasingly irrelevant to the overall picture, 25 minutes back in 36th place. Meanwhile, back in the U.S., fellow ex-champion Greg LeMond is apparently salivating at the prospect of being able to say some Bad Stuff About Lance in a public forum:

Three-time Tour de France champion Greg LeMond has been served with a grand jury subpoena as part of a federal investigation of possible fraud and doping charges against Lance Armstrong and his associates, according to the New York Daily News.

“We are overjoyed,” LeMond’s wife, Kathy, told the newspaper. “I hope the truth will come out.” (AP)