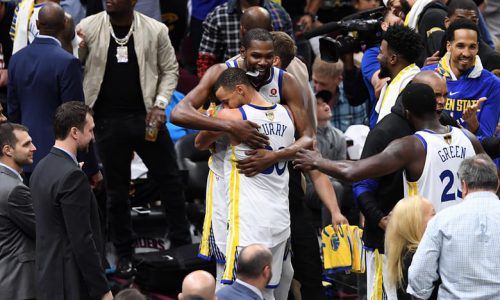 It still boggles the mind that My Golden State Warriors, league laughingstock for the better part of two decades, are now three-time champs. My personal thanks go out to everyone who made this possible, from Steve Kerr and Bob Myers, to Joe Lacob and Peter Guber, to Kevin and Andre and Klay and My Son Draymond.

But most of all to Wardell Stephen Curry III. Without him none of this happens. It is his talent and his attitude that defines how the team plays; it was his ability to get along with others that convinced KD that hey, it might be fun to go play in Oakland. I would like to now officially and in public name Steph my favorite athlete in any sport ever. I’m sure that will somewhat lessen the sting of missing out on Finals MVP again.

And that’s it for another rather lengthy NBA season. Next year should be fun, with the mystery of where LeBron ends up (Houston anyone?) and the Celtics shaping up to be a serious challenger. See you then.