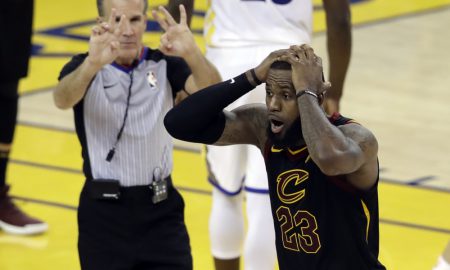 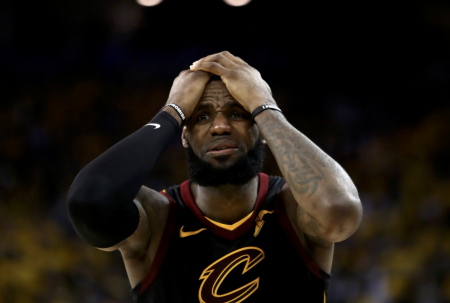 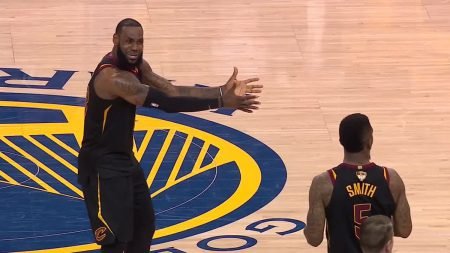 Fortunately, we live in the real world, where 51 points, 8 rebounds, and 8 assists from The Minotaur Currently Known as LeBron James are not necessarily enough to earn a victory. A world where a charge call on Kevin Durant with 36 seconds left in the game is reviewed to determine whether LeBron was in the restricted area and ends up being changed to a block, resulting in Durant free throws that tie the game. A world where George Hill has a chance to secure the win by making two free throws, but misses the second, and the rebound is corralled by Smith, who then inexplicably dribbles away from the basket as the clock runs out, sending the game into overtime.1Also a world where events more or less force one to pile up numerous dependent clauses.

As it turned out, the teams played 5 minutes of overtime, during which the Warriors scored 17 points and the Cavaliers 7. Just like that a golden opportunity for the Cavs to stun the world by stealing one in Oakland went up in smoke.

And they were not happy about it. With only 2.6 seconds remaining in OT, when Shaun Livingston attempted (and missed) a short jump shot rather than take a shot-clock violation, Cavs forward and reality-TV star Tristan Thompson flipped his lid:

As a result, Thompson may be suspended for Game 2. As may Kevin Love, who was on the bench but stepped onto the court during the altercation. And the Warriors may get Andre Iguodala back. All of which might lead one to believe that the Cavs are doomed — but you didn’t hear me say it, not after this mess. The sad truth is that this year’s Warriors sometimes just go missing for stretches, as they did several times in Game 1. Hopefully they will see fit to show up for the full game on Sunday.

You can be sure LeBron will. I am no LBJ fan and will be happy to tell you all the reasons why I don’t like him — some of them were on display last night. But there is no denying that he is playing at a superhuman level right now, even by his own lofty standards. In Game 1 he came just that close to earning his team an upset that no one expected. Respect is due — which not to say that I won’t, as soon as I’m finished typing this sentence, scroll back up to the top of the page and spend some quality time with those pictures of him dying inside.