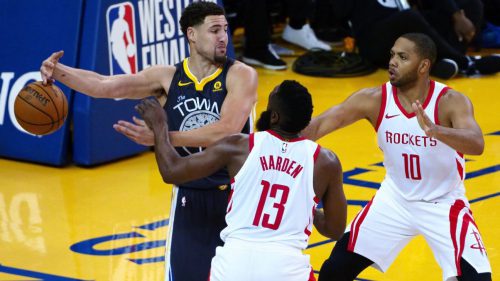 It is my unpleasant and self-appointed duty to fill this space with words about last night’s basketball game, which had a brilliant start — a 12–0 Warriors run, after which I was sending giddy texts to everyone in my address book — and then, as the Old Man says, “little by little it started going to shit.” The wife and I sat on our barstools at the recently reopened Tomo Sushi in Arcata, sadly eating delicious food as what seemed like a sure thing went slowly sideways.

I wish there was some excuse, some quirk, some extenuating circumstance that I could cite. And yes, the W’s were missing key cog Andre Iguodala, who sat out with a leg contusion. But that shouldn’t have mattered; the Warriors simply let a game that they had in their grasp slip away. The Rockets just appeared to want it more, and that does matter, even at this rarefied level of competition.

On the other hand, isn’t this what I keep asking for? Some challenge, some competition, some adversity for my team to overcome on their way to glory? So here you go, bright boy — on Thursday the Dubs will play a road game that they really need to win, no kidding around. Happy now?