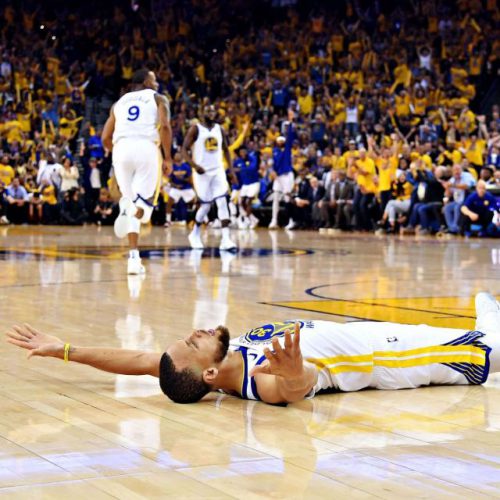 After two days of camping it was a little disorienting to find myself in a loud, colorful sports bar in Sacramento yesterday, waiting for Game 3 to start. Confusingly too, despite the presence of about 23 big screens, it took a while for us to get TNT on one of them; and when we did, Shaquille O’Neal was talking about gun control, then Charles Barkley said some things about mental health. The general feeling was of a slightly, though not disagreeably, skewed parallel universe.

When the game finally got underway the Warriors had the same starting lineup they’ve been using (what they now call the “Hamptons 5”: Curry, Thompson, Durant, Iguodala, Green), but a new defensive scheme designed to keep Steph from being picked on defensively. It did not go well at first. With Curry scrambling to get back to his own man rather than switch, the Rockets found the open man and got a few easy baskets.

In the first minutes of the game the Rockets built what seemed like a substantial lead. A look back at the play-by-play shows that in fact their biggest lead was 4, at 8–4. At that point the W’s took a timeout, immediately after which Steph Curry hit his first 3 of the game.

Over the annoyingly long interval between Games 2 and 3 there had been a lot of loose talk — even from yours truly — about “what’s wrong with Steph.” The truth was that his floor game had been solid, but his long-range shooting had not been what we expect it to be. And after making that one triple, he continued to struggle throughout the first half, even as the W’s slowly built a solid 11-point lead.

There was something about this game that was very familiar, reminding me of games in the past when Steph had had one of his big third quarters. And, not to blow my own horn or anything, I do have in my possession a text message timestamped 6:05 PM — about 10 minutes before the beginning of the second half — predicting an 18-point 3rd for Mr. Curry. Which is exactly what happened.

I always enjoy watching the Warriors win. But it’s never more fun than it is when Steph goes on one of these runs, fueling the crowd, fueling his teammates, the momentum building and building. By the time the 3rd quarter was over, the Dubs were up 21 and Steph had been heard to shout “This is my fucking house!”

Which is something you hear on a basketball court every day, but don’t expect from mild-mannered Steph, who was subsequently rebuked for the outburst by his mom.

She already sent me two home videos, showing me the clip and playing it back. She was telling me how I need to wash my mouth out, saying to wash it out with soap. It’s a message I’ve heard before.

Which is adorable, of course — but come on, Sonya. Your boy’s earned the right to blow off a little steam, after sticking with the game plan and remaining patient despite the negativity of the nattering nabobs. Or as Rick James would put it,

But let’s not get too giddy just yet. The Warriors now lead the series 2–1 and will need a repeat performance tomorrow to get themselves where they want to be, heading back to Houston with a 3–1 lead. Anything beyond that is the distant future, and not yet even worth contemplating.