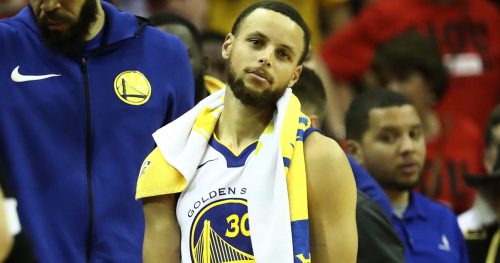 Throughout this year’s playoffs, the Warriors have made a habit of gifting every team with one victory at home, just to reward the local fans for all they’ve done. This meant writing off Game 4 in San Antonio and Game 3 in New Orleans; but in the case of the Houston Rockets, who had home-court advantage, it was necessary to surrender Game 2 — otherwise there would be no more games in Houston.

Or at least that’s what I’m telling myself today, the morning after my beloved basketball team phoned in a sadly lackluster performance. The numbers tell the story; even Kevin Durant, who scored 38 points, was –28 for the night. Klay Thompson was largely absent, and something is definitely wrong with Steph Curry, who is 2-for-13 on threes over the last two games (though his overall field-goal percentage, assist, and rebound numbers are pretty good).

But all that will be forgotten if the Good Warriors show up at Oracle Arena on Sunday, when Game 3 will tip off shortly after 5 P.M. Unfortunately that is three days from now, giving the Dub Nation 70-something hours to stew in its juices. Perhaps we will grow as people during that time. Wouldn’t that be nice?