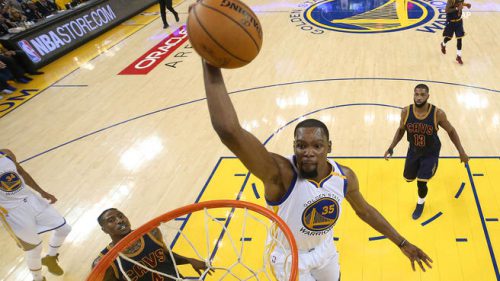 There were some anxious moments shortly before 6:00 last night as I waited outside the Arcata Theater Lounge for the doors to open. I was already nervous about the playoff game between the W’s and Cavs, the first since the debacle that was Game 7 of last year’s Finals, and the good people at ATL — whom for the record I dearly love — were not helping by taking their sweet time about letting us in.

But by tipoff I was safely in my seat, martini in hand, and from there on things went swimmingly. There is no official “perfect game” in basketball as there is in baseball, but the Warriors’ performance in Game 1 was about as close as you can get. I’m not sure which I enjoyed more: Kevin Durant’s numerous vicious dunks, Steph Curry’s pull-up 63-footer, or LeBron James’s constant whining and crying.

I say this with all due respect to LeBron, who of late has been making a convincing case to be considered possibly the best player in the history of basketball. But speaking purely objectively, he is a crybaby. He’s used to getting things way and when he doesn’t, he gets real petulant real fast.

And things were not going his way last night. His team turned the ball over a lot, failed repeatedly to play defense, and appeared to visibly quit halfway through the third quarter. The Warriors, meanwhile, tied an NBA record by committing only four turnovers in the entire game. Which leads one to think that this whole thing was probably a little fluky; I don’t know if it’s possible for anyone to consistently be as good as the Warriors were last night. I expect the rest of the series to be a little more competitive. But for one night, it was a lot of fun.