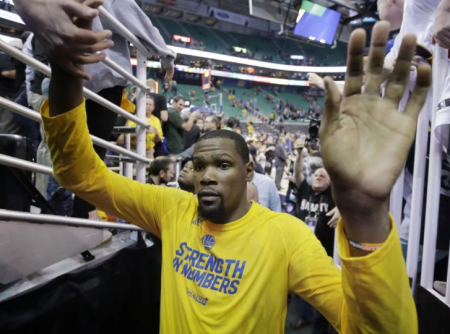 In the second round of the playoffs — a/k/a the Western Conference Semifinals — the Warriors slowly, methodically strangled all the life out of the Utah Jazz, a pretty good basketball team who just didn’t have the firepower to compete at the rarefied level the W’s currently occupy. It’s possible that no one does — with the possible exception of the Cleveland Cavaliers, who are also 8–0 in the playoffs, looming on the horizon like a coming storm.

But in the meantime the Dubs will have to play the winner of the San Antonio Spurs/Houston Rockets series, now tied at 2–2. It is of course Wrong to look past any opponent, and those are both quality teams who are capable of causing trouble. But neither has looked what you’d call formidable up to this point, and the Warriors will get to sit back and rest as they fight a war of attrition.

The only problem worth noting at the moment is the continued absence of Coach Steve Kerr, who had surgery this week to address his spinal fluid leak. This is less of a problem for us than it is for Steve, who has apparently been dealing with brutal pain throughout the season. I hope he feels better, whether or not he makes it back onto the court.

In the meantime, the sun is shining, so I’m going to shut down this machine and go walk around in it.

← How many more days? ← The Vultures Are Circling