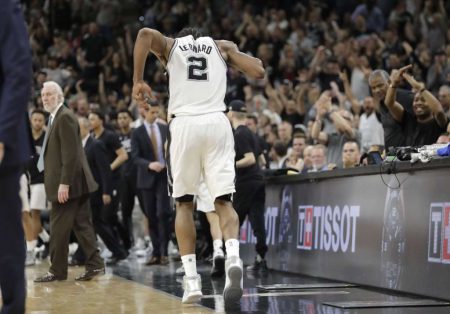 Now there’s something to write about.

Yesterday My Golden State Warriors and Other People’s San Antonio Spurs met in Game 1 of the Western Conference Finals. In the pregame show all the talk was about, do the Spurs have any chance at all against this Dubs juggernaut? Is it 80, 90, or 95% likely that the Warriors will win? In one segment, Steph Curry, Kevin Durant, and Draymond Green’s mothers sat around drinking mimosas and talking like the title was already won. I myself was telling people that any bet on the Spurs was a foolish one, that with Kawhi Leonard playing on a questionable ankle, the series would not be competitive.

Then the game started.

Whether it was due to rust, sunspots, or The Genius Gregg Popovich, the Warriors looked terrible from the drop, while the Spurs looked like a team with something to prove. The visitors raced out to a 30–14 lead in the first quarter as I fidgeted nervously on the living room couch, picking at a scab on my ankle. Between quarters I took a deep breath and told myself that surely this was a fluke — the W’s would shake off their lethargy and right the ship in the 2nd.

But no. San Antonio’s lead ballooned to an unbelievable 25 points, dipped a bit, then stabilized at 20 at halftime. I made a sandwich and muttered to myself — we’re a third-quarter team, right?

Then the second half started, and nothing was different. All the Spurs were playing well, but Kawhi was everywhere, dominating on both the offensive and defensive ends. Midway through the 3rd quarter, the W’s deficit was in the mid-20s and growing. I started mentally preparing myself for the loss and two days of reading about how overrated the Warriors were.

Then, after taking a shot, Kawhi stepped backward to regain his balance and landed on a teammate’s foot, tweaking his bad ankle. He shook it off and kept playing, but a couple minutes later he shot a 3 and this time came down on Zaza Pachulia’s foot — again, as luck would have it, on his left (injured) leg.

Kawhi grimaced, hobbled around a bit, and was quickly pulled from the game. And that was that. When he left, the Spurs were up 23; in the rest of the game, they were –25, which for the math-deficient adds up to –2.

It wasn’t quite that easy, of course. It took superb offensive performances from Curry and Durant to pull this one out, but if Kawhi hadn’t been hurt, the Spurs would have won and I would be moping around in a bitter funk rather than writing this blog entry. That’s one reason why history is written by the winners, I think — the losers just don’t feel like it.

Game 2 is tomorrow. In the meantime, we all breathlessly await the results of an MRI on Kawhi’s ankle. I honestly hope he’s OK; I want the W’s to win this series fair and square, without any more asterisks than the one that’s already attached to Game 1. As far as that goes, well, a W is a W is a W; no one in Dub Nation is inclined to give this one back, but I hope we all appreciate how lucky we got.