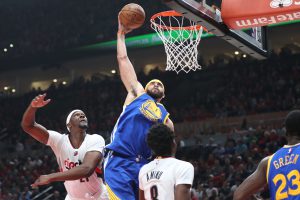 They’re still entertaining to watch, though. In Game 4 of the opening-round series against Portland, they dropped 45 first-quarter points on the Blazers in a blinding blitzkrieg of basketball brutality. They completed the sweep three quarters later and now await the winner of the Utah Jazz/LA Clippers series.

Along the way they’ve had to deal with a bit of what constitutes adversity in the current state of things, playing two games without Durant and — more to the point — losing head coach Steve Kerr to a recurrence of complications from his back surgery at the beginning of last season. Kerr is out indefinitely, which is a bit worrisome. Yes, they’ve won plenty of games without him before, starting the 2015–16 season 24–0 and then 39–4 under assistant Luke Walton. But being without your Maximum Leader in a tight playoff series — assuming there’s going to be one — is different.

Still, on the spectrum of possible things to worry about at this point in history, it’s pretty minor. So I’m going to do my best to leave all that baggage aside and enjoy the rest of these games for what they are: games. Right?