A few days ago I was at a friend’s house in Berkeley watching Last Week Tonight with John Oliver, and Oliver was talking about how New Zealand was looking for a new flag. Apparently, everyone in the country was invited to submit their designs, with the results you would expect — some interesting, some boring, and some insane. (In the interim, the Kiwis have opted to stay with their old flag, to the disappointment of the whole world.) One of the rejected designs made me laugh so hard I stopped breathing for a while. It probably won’t have the same effect on you, but I still wanted to share. 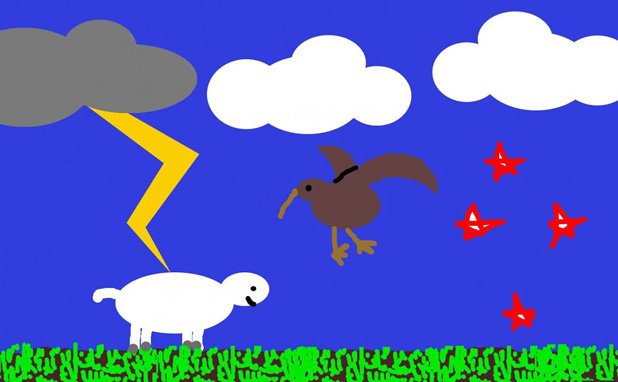 I’m not sure exactly what struck me so funny about it — some combination of the earless sheep, the zig-zag lightning bolt, and the fact that someone thought a sheep being struck by lightning was a good idea for a flag. It is making me giggle a little even now, and for that, I thank you, New Zealand.