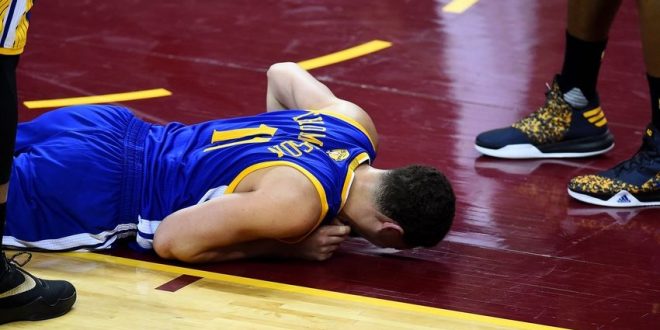 Klay Thompson grabs some floor time after suffering a thigh contusion. It was that kind of night.

What a difference three days make. Apparently the Cleveland Cavaliers took somewhat personally all the criticism, disparagement, and outright mockery they endured in the 72 hours between Games 2 and 3 of the NBA Finals. Last night they looked like a whole different team, scoring the first nine points of the game and building a 30–10 lead with 1:22 left in the first quarter. For the math-challenged, that’s a 20-point lead. In the first quarter.

The Warriors battled back and managed to get within 8 at the half, but in the third quarter the beatdown resumed. The final score ended up at 120–90, by which time we had long since abandoned our table at the Pearl Lounge in Eureka.

That amounts to a 63-point swing between Games 2 and 3. Were those really the same two teams out there? The Cavaliers looked more confident, more aggressive, and somehow larger than they had in the previous game. Their arms were longer, their rotations faster. It was their defense that won the game for them; they again bottled up Steph Curry, limiting him to 19 points on 6-for-13 shooting, and this time the Warriors’ bench did not come to the rescue. The Cavs’ offense was not bad either; they shot 52% from the field and 48% on threes.

So as a Warriors fan, what can I say? My team got their butts whipped. They seemed stunned by what the Cavs threw at them, and instead of the unbeatable superteam of Games 1 and 2, looked like regular human beings who sometimes get flustered and make mistakes. And instead of a brutal mismatch leading to the Warriors’ coronation as two-time champs, we have a series now.

The W’s are still in better shape than they were last year, when they were down 2–1 at this point. But last night’s debacle opens some questions that will need answering. Game 4 is tomorrow, and with any luck it will be the first actual competitive game of the Finals. Coach Kerr and his minions will earn their paychecks between now and then. I hope.