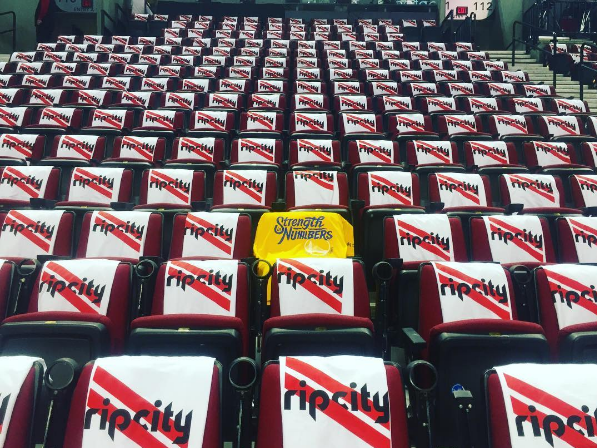 Early yesterday word came down that Stephen Curry was going to be named MVP of the NBA for the second straight year, surprising absolutely no one. Quoth the Draymond: “I felt kind of bad today, because I didn’t tell him congratulations. Because I felt like I knew since December.”

Turns out not only did he win the award, he was the first unanimous MVP in the history of the league, garnering 131 first-place votes versus zero for everybody else combined.

But that’s not the crazy part.

The MVP was never in doubt. What was in doubt was Steph’s status for the game scheduled to tip off shortly after 7:30 in Portland last night. After missing two weeks with a knee injury, he was listed as doubtful, then questionable, then active. But when the game started he was still on the bench.

The first few minutes did not go well for the Warriors, to say the least; with 5:58 left in the first quarter, they were trailing 16-2. That was when #30 came off the bench. The feel of the game changed immediately, although Steph was not quite himself; he moved well and hit a few shots, but missed his first nine three-point attempts. Yes, that’s the number 9. It takes a certain amount of guts to keep firing at that point, but if anyone’s earned the right, it’s him.

Things changed even more in the second quarter when starting point guard Shaun Livingston — who had been struggling mightily all night — got clubbed in the head going up for a layup. The normally mild-mannered Livingston dropped an MF-bomb on the referee, earning himself two quick technicals and the rest of the night off.

In the second half Steph finally got it going, announcing both literally and figuratively, “I’m Back.” 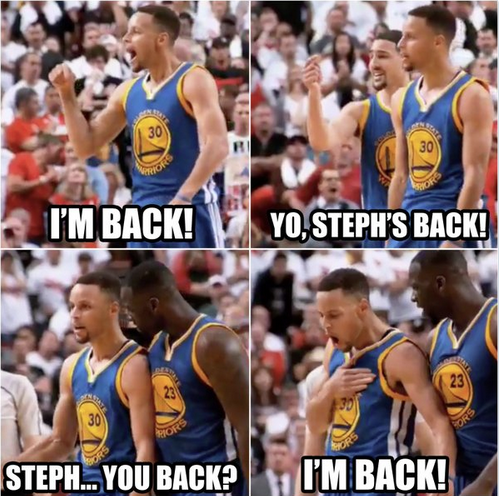 Even so, the Blazers hung in there, eventually forcing overtime when Curry couldn’t get a potential game-winner to fall in the closing seconds of regulation. And then what happened? I’m not sure I can remember. 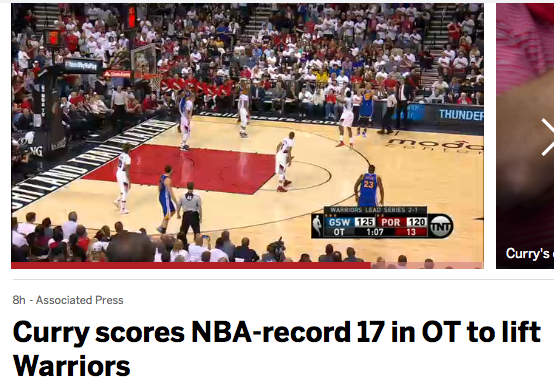 Oh, right. That happened. Sorry, Blazers. He’s the MVP for a reason.