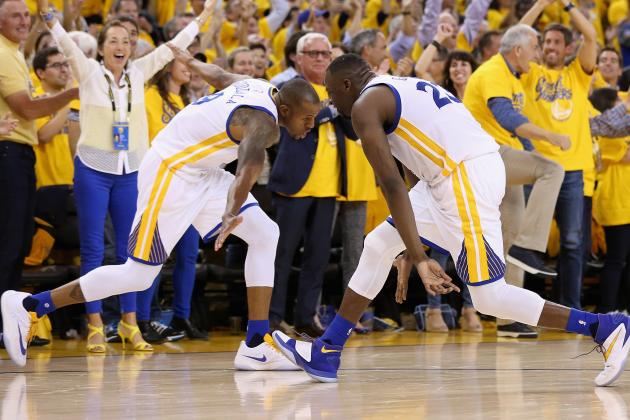 Until about 9:15 PDT yesterday, it really did not look like the Warriors’ night. For three quarters everything the Portland Trail Blazers threw at the rim had been going in, while the Warriors uncharacteristically struggled to find good shots, with Klay Thompson in particular launching some ill-advised prayers. The referees had not been helping, making a number of highly questionable calls both ways, but mostly against my team.

As usual I had a couple text threads going and certain people, I’m not going to name any names here, were freaking out a little bit. I’d like to say that my belief never wavered, but for a while there I was resigned to the W’s surrendering this one. They are after all playing without their best player, who is also the best player on the planet right now.

But it turned out there was nothing to fear. In the 4th quarter the Warriors calmly and methodically turned it up a notch, then another, then a final half a notch or so. They ended up outscoring the Blazers 34-12 in the quarter and winning the game going away. The final score makes it look like just another day at the office for the champs, which it was not. There was a desperate feel to the 3rd quarter, where the Dubs mounted repeated charges and the Blazers met every one with a run of their own.

Damian Lillard is a dangerous dude, and when he gets it going there’s not much anyone can do about it; he can pull up from just about anywhere and launch a shot. The irony is that in this game, while Lillard and backcourt mate C.J. McCollum were dominating from the perimeter, the Warriors were pounding it inside. They outscored the Blazers 56-28 in the paint, with Festus Ezeli contributing some huge minutes down the stretch.

Steph Curry may or may not be back for Game 3 on Saturday. It would be nice to have him, but the team is wisely going to be very cautious about his return. I like our chances either way; the heart the Stephless Wonders showed last night speaks volumes about them, and while I don’t generally wear a hat, consider it tipped.