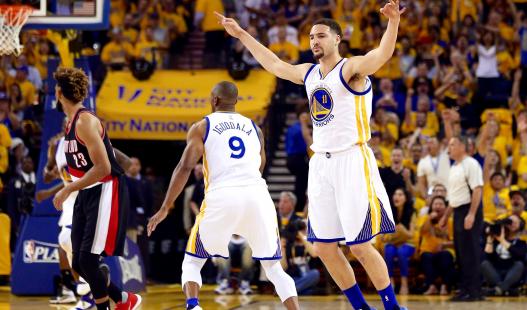 Even in this age of technology, you just get stuck sometimes. Yesterday my beloved and I were en route home from the Bay Area, on a tight schedule, and so were in the car for the duration of Dubs/Blazers Game 1. At first we had good radio reception, but gradually that went away. Then we fell back on streaming NBA League Pass Audio (which now sadly costs money), but the coverage got spottier until all we could get was the text play-by-play. Finally the we hit the dead spots on 101 and even that went away; complete media silence.

Fortunately the Warriors were rolling from the get-go, and there was never much drama in the game. The closest it got after the Warriors took a 20-point lead in the 1st quarter was 9, and that was only for a minute. The Stephless Wonders continued to play efficient offense and smothering defense, keeping the dangerous Damian Lillard in check. A lot of that was thanks to Klay Thompson, who also scored 37 points, continuing his impressive play in Curry’s absence. Meanwhile Draymond Green had another ho-hum 23/13/11 triple-double.

In truth, it’s hard to see how things could be going better for the Warriors, who are continuing to win handily while Steph gets the rest he didn’t get while they chased 73 wins. He’s been saying that he thinks he’ll be ready for Game 3, but at this point there’s absolutely no reason to rush him back. Take a spa day, Steph; you’ve earned it.