The Running of the Bulls’ Mouths 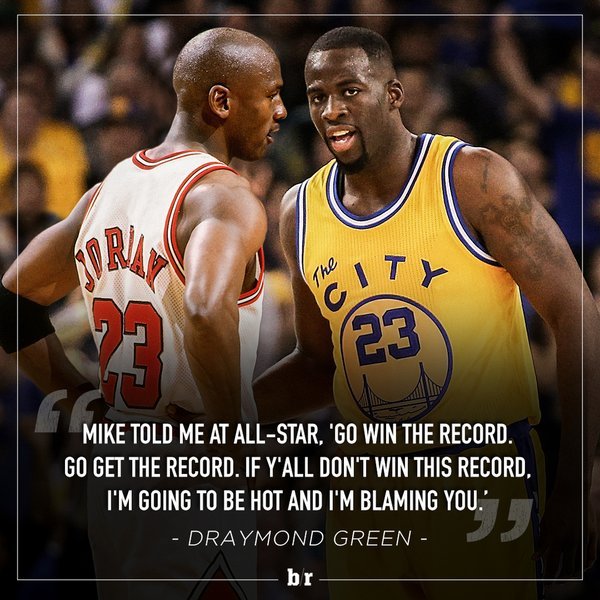 An interesting subplot to the current NBA season has been how the various members of the old Chicago Bulls have reacted to the Warriors’ attempt to break their record. First Scottie Pippen came out and said that the 95-96 Bulls would sweep this Warriors team. Then Horace Grant doubled down on that by saying that any of the Bulls’ six championship teams would have swept the W’s. These kinds of statements are easy to make, of course, because they can never actually be disproven. The classier move would be to just shut up, but it’s all par for the course.

But now it’s come out that not only did Michael Jordan tell Draymond Green that the Warriors should go ahead and break the record, but that he, Jordan, would hold Draymond personally responsible if they didn’t. Now, is that some kind of tricky reverse psychology thing intended to mess with Draymond’s head? If not it’s a surprising turnaround from MJ, who’s always been nothing if not hypercompetitive, or to put it another way, dickish.

It’s been my official position that arguing the relative merits of the two teams is a waste of time, but if you wanted to have that conversation, I could go there. Give Jordan and co. credit: they certainly seem to have done more with less. I just looked at the 95-96 Bulls roster for the first time in a while, and it is surprisingly thin. After Jordan, Pippen, and Dennis Rodman, you get to people like Ron Harper (a savvy guard who was past his prime); Toni Kukoc (a gifted scorer but European and soft); Steve Kerr (great shooter but a liability on defense – sorry, Steve); and a rotating cast of centers led by Luc Longley, nobody’s idea of a dominating force in the middle.

The Bulls roster had room for people like Randy Brown (who?), Jason Caffey (a promising rookie who flamed out when he got traded to the Warriors – as, to be fair, everyone did in the 90s and 00s), Rodman babysitter Jack Haley, James Edwards, Dickie Simpkins, and worst of all, Jud Buechler, the living embodiment of the concept of “garbage time.” Most of those guys would get flat-out cut from the Warriors, and none of them would play, except maybe Caffey.

None of which is meant to belittle the Bulls’ accomplishment; it just makes it all the more remarkable. And most of it has to be chalked up to Jordan, who above and beyond his athletic ability, in those years just seemed to have the ability to bend reality to his will.

And at the moment, his will is that the W’s should go ahead and stomp the Grizzlies tomorrow. So take note, Day-Day, and don’t disappoint the man.