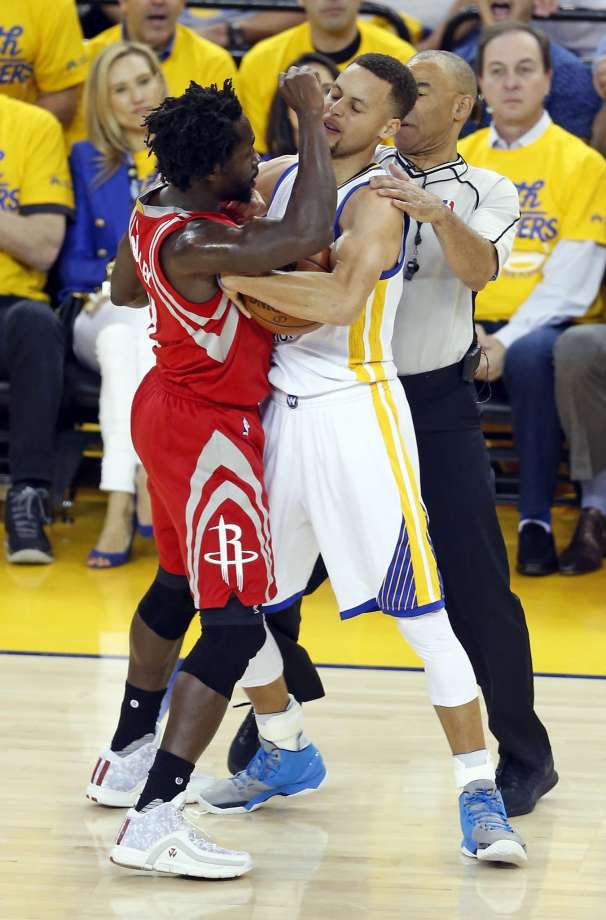 That the Warriors handled the Houston Rockets easily last night seems almost beside the point, as old nightmares revived themselves when Steph Curry came up limping in the 2nd quarter. He had just scored a bucket to put the W’s up 26 when he turned to run back on D and spontaneously tweaked his ankle, just like he used to in the bad old days.

Somehow these things always seem to happen against the Houston Rockets, who last year managed to concuss (or near-concuss) both Steph and Klay Thompson in the Western Conference Finals. Word at the moment is that Steph is fine, that he’ll miss a game at most, but I still don’t like it. The Rockets’ strategy – and admittedly it’s a smart one – seems to be to harass Steph as much as possible; in the first quarter he almost got into it with Patrick Beverly, whose physical defense included an elbow to the face. So it behooves us, and I use that word advisedly, to get this series over with as quickly as possible.

I didn’t get to watch the whole game, or even much of it, as we had houseguests and I was trying to be good. But I did happen to catch Curry tussling with Beverly, getting hit with a technical, and then going apeshit, outscoring the Rockets 16-15 in the first quarter. I was not watching when the injury happened, of which I am glad. It was kind of a strange day all around, one that ended late, with a sparsely attended but very entertaining concert by Chuck Prophet and Garland Jeffreys. Thankfully today is a day of rest. I think we all need it.