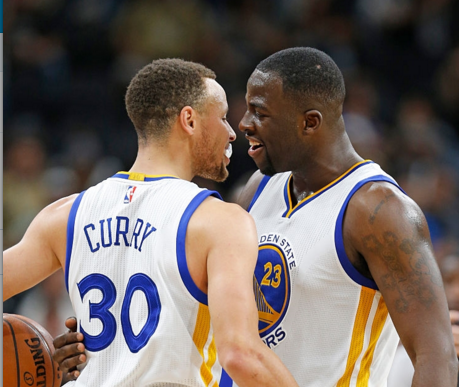 'I'd kiss you if you'd take out your damn mouthguard for once.'

Last night a basketball game was played in San Antonio, Texas between the home team, who call themselves the Spurs, and a bunch of guys from “Golden State,” wherever that is. This was the 81st game in the National Basketball Association season for both teams, normally not something the world at large has much interest in. But it just so happened that the visitors – whom we’ll call “The Unstoppable Force” – were going for their 72nd win in those 81 games, while the Spurs had not lost at home all season. We’ll call them “The Immovable Object.”

It also so happened that the Force had not beat the Object on their home floor since 1997, a span of 33 games. So the Force really wanted this one, and many of us who root for them were very nervous before the game, pacing our living rooms and muttering darkly about streaks, curses, and the sorceror Gregg Popovich. (Of course in any discussion of this type I am legally required to mention that regular-season goals are secondary to the real prize, which is winning a championship. I have now said it.)

Then the game started, and from the drop it was intense and exciting, if somewhat ugly. Both teams were playing their toughest defense, holding each other around 30% shooting, and at halftime the score was 35-35. This is unusual in any NBA game, much less one involving the Force, who regularly score in the high 30s in the first quarter. It looked less like two sweet-shooting, run-and-gun, 21st-century offenses and more like the Houston Rockets and New York Knicks, circa 1994.

But after halftime things opened up a bit and the Force began to flow. (Aside: Now that Disney owns the Star Wars franchise, how long until there is an actual pro sports team called the Force, or maybe the Jedi? It seems inevitable.) The game remained close but slowly the visitors started to create a little separation, getting huge contributions from all over – I can remember individual big plays by Mo Speights, Andre Iguodala, Shaun Livingston, and Andrew Bogut, not to mention the usual Steph-Klay-Dray triad.

Long story short, the good guys won. They are now tied with the 1995-96 Chicago Bulls for most wins in an NBA season, with a chance to win one more against the Memphis Grizzlies on Wednesday. What else is there to say?