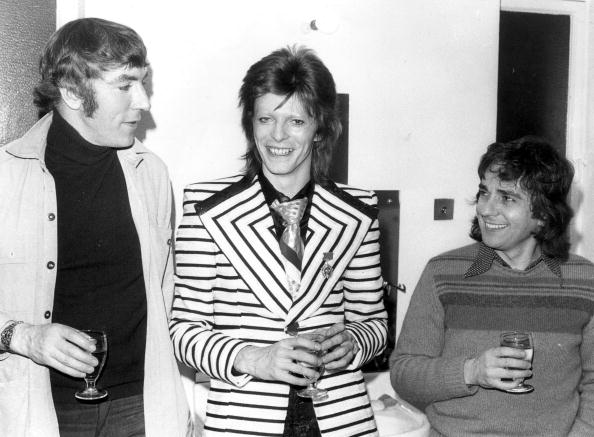 2. Earlier this week I came to the horrifying realization that, even as we speak, producers are pitching Bowie biopic projects to movie studios. There is only one, very specific way in which such a project could go right: an “I’m Not There”-style film where many different actors play many different Bowies, directed by someone who’s properly empathetic to the subject (perhaps Bowie’s son Duncan Jones). There are about a million ways it could go wrong, some of them obscene; imagine someone like, I don’t know, Justins Bieber or Timberlake being cast in the role. Any attempt at such a travesty will have to be stopped, by any means necessary.

3. A story came out this week about how Bowie turned down a request to collaborate with Coldplay, saying “It’s not a very good song, is it?” I didn’t need any more reasons to love him, but there it is. The man knew dreck when he saw it. This compares him favorably with his old collaborator Brian Eno, who’s been banking Coldplay paychecks for years now.

4. There was a rumor this week that Kanye West was planning to record an album of Bowie covers (Kanye denied it). A lot of people were upset by this idea, many even going so far as to sign an online petition asking him to cease and desist. Frankly, this is pretty far down on my list of possible Bowie-related travesties (see #2), and now I kind of wish he would go ahead and do it, just to piss people off.

5. The week after Bowie’s death, in the wake of the release of Blackstar, scientists announced that there may be a dark planet lurking out there in the far recesses of the solar system. I’m just saying, is all.

6. Something about this recent news item makes me think, David would be proud.

7. I’ve been trying to find some way to link Bowie to my other favorite topic, the Golden State Warriors. And even though I believe in the interconnectedness of everything, it’s not easy to do. I did however hear that the Dubs were blasting Bowie songs at practice the day after he died, and I’d like to think they listened to “Golden Years,” my own personal unofficial theme song for the current transcendent version of the team.

And finally…as far as I’m concerned, Bowie’s passing proves once and for all that no one lives forever. If anyone could do it, it would have been he.* Conduct yourselves accordingly.

* This is assuming of course that he is, in fact, dead. Given the quiet and private way he died conspiracy theories are inevitable, and even rather welcome. The “Elvis is alive” rumors were always fun, and as a youth Bowie aspired to be the English Elvis; so let the “Bowie is alive” rumors begin.

← Let the thousand Bowies bloom ← Another One Bites the Dust