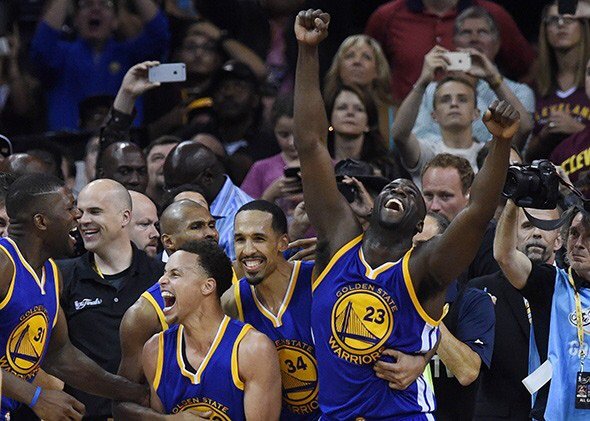 But then I rallied and got on the horn to the channel in question, and finally got a phone number that expedited the solution of the problem. That sorted out, we adjourned to dinner at an Indian place called Bengal, which was fantastic. Afterward there was time to kill; we had a little walk in the park, did a crossword puzzle. There was soccer on the tube, then a lame episode of NBA Today, then the pregame blather. At last it was gametime.

Then, just as the starting linups were being announced, the cable cut out. No picture, no sound. Did I panic? Maybe a little. Then I started unplugging and replugging everything I could get my hands on, and after a few tense minutes communications were restored. By then it was 7-4 Cleveland, but the Warriors soon righted the ship and led 28-15 after 1.

At that point you had to feel like the Cavs didn’t look so good in a game they absolutely had to have. They were clanging shots and just didn’t seem to have the energy they needed.

Shaun Livingston helped them out a little bit at the start of the 2nd by fouling James Jones attempting a 3. Jones made all of the foul shots and after that there was a long stretch of very little scoring. The Cavs got it in gear toward the end of the quarter and closed to within 45-43 at the half.

This turn of events caused some concern among my people. My response was that the Cavs had expended a lot of energy to get back in it, which should be favorable come the 2nd half. And I pretty much believed that, in a hopeful sort of way.

And indeed, the Cavs struggled in the 3rd, putting only 13 points on the board. The W’s got nice contributions on the offensive end from Livingston, Andre Iguodala, and Festus Ezeli of all people. Festus for the Rest of Us hit a couple of big baskets, provided his usual stout defense and rebounding, and made 3 of his 4 free throws.

At the end of 3 it was 73-61 Warriors, and the Nation took a deep breath and girded itself for one more quarter. We were in pretty good shape, but nervous too. LeBron James had been oddly passive for most of the game, sharing the ball more then he had been throughout the series. The TV commentators speculated that he had been pacing himself, conserving energy for a dominating 4th quarter.

And maybe that’s what he had in mind, but it didn’t quite work out that way. After the Cavs went on a mini-run, closing to within 7 at the 10:12 mark, the Warriors started pulling away again. Somewhere in there the cable died again, prompting a few seconds of stunned disbelief, then a mad scramble of plugging and unplugging. After 4 or 5 very long minutes, picture and sanity were restored in time to see Andre, Steph, and Klay hit consecutive threes. That last one felt important, as Klay had been really struggling, and his shot put the Warriors up 14 with 6:45 left.

After Iman Shumpert converted couple of freebies, Andre drained another 3, bringing the lead to 15. At this point I started thinking of the champagne chilling in the fridge-a-dilly. Throughout the playoffs – and the season, really – whenever Andre has been hitting, it’s been lights out. The opponent has no chance.

With the Warriors up 13 and 1:50 to go, I actually brought the bottle over to the couch. Which turned out to be a mistake, a nearly very costly one. The erratic J.R. Smith, who had been mostly invisible in the Finals, of course picked this moment to go crazy. He hit three 3s in a 41-second span, and the W’s ended up leading by only 4 with 33 seconds left, out of timeouts and making a very dangerous inbounds pass in the backcourt.

It could all so easily have gone wrong in that moment. A turnover seemed imminent, but fortunately Steph Curry got the ball and drew the foul. He hit both (of course) to make it 6. On the Cavs’ next possession J.R. finally missed one, Iguodala corralled the rebound and was fouled. He hit one of two. 7-point lead.

At this point I was able to breathe a little bit again. LeBron missed a long 3; Andre once again got the rebound and the foul. Again he made only one. 105-97. 10 seconds left.

J.R. Smith attempted a long, high-degree-of-difficulty 3; missed it; Steph grabbed the rebound. And that was that.

The Golden State Warriors were NBA Champions. I popped open a bottle of, as it turned out, very mediocre bubbly. And the sun was coming up over Central London. I felt many things at once: joyous, confused, relieved, and tired. So after a couple quick nightcaps and a few text exchanges with my fellow travelers, it was night-night time, and the world of which my boys were now the champs continued to turn.