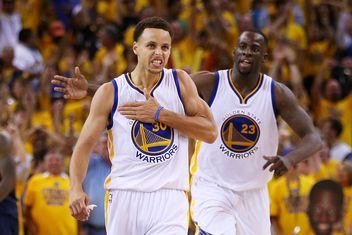 Everything seemed to be up in the air as we crawled through miserably slow traffic in Petaluma, still two hours away from our destination with an hour till gametime. Things had not been going exactly according to plan, and for a moment I considered bolting from the vehicle and making my way to the nearest sports bar on foot. But that would have created some substantial difficulties in my personal life, so I stayed the course.

We got the game on the radio and I was comforted somewhat by the familiar tones of Tim Roye, the longtime voice of the Warriors and a man who does as good a job as humanly possible at the essentially futile task of describing a basketball game on the radio. I was comforted still further by the fact that the Dubs took an early lead behind a flurry of Draymond points, but that comfort was short-lived. The Cavs quickly caught up and it became clear that we were in for another nail-biter. (My cuticles are currently as chewed up as they’ve ever been, which is probably not a coincidence.)

At one point during the first quarter we actually drove by Oracle Arena, which was a tad surreal. Earlier in the drive we had been debating the age-old question of flight vs. invisibility. I come down firmly on the side of flight – or at least that’s my official position; since I will never have to actually make that decision, I will never know what truly lurks in the depths of my heart – but it occurred to me that if I were invisible, I could just walk into the arena, and maybe find an empty spot on the Warriors’ bench. And then, if necessary, maybe tip away an inbounds pass or something. Make a contribution.

But by then the traffic had opened up and we made good time to San Jose, arriving just in time to see the Black Falcon give the Warriors a 51-50 lead with with a three-point play on a magnificent putback slam. (My beloved pointed out that 5150 is police code for dangerous insanity, which seemed just perfect.)

After that I felt pretty confident, but there was no way to relax through the 3rd quarter and first half of the 4th, not with LeBron Fucking James raining in ridiculous 28-footers to go with his usual fadeaways, floaters, and charging-bull drives to the basket. Andre Iguodala again did a yeoman, or maybe a captain’s job – anyway, a really good one – on defense, and still LeBron singlehandedly kept his team in the game.

And then somebody somewhere flipped a switch, and it was like we were in the middle of a beautiful dream. Andre pogoed up out of a crowd to snatch down a miraculous offensive rebound, got the basket and the foul, and then did a bizarre and wonderful Hulk-walk back to halfcourt. He missed the free throw but no matter; the fuse had been lit.

From that moment on everything just seemed to go right, and Oakland once again received a visitation from the recently dormant Eater of Souls, #30, they call him MR. Curry. Steph started dancing, teasing, taunting, and launching up those quick-release bombs that no doubt had beer bottles being hurled against walls all over Northern Ohio. Oh my god, but it was beautiful.

We had been waiting a while for an outburst like that. I respect Steph tremendously for the professionalism he has shown throughout this series in sticking with the game plan, making the right play, and not succumbing to the temptation to try and out-LeBron LeBron. Yes, I respect that; but I loved seeing him make Matthew Dellavedova almost fall over, then launch a 26-foot dagger that didn’t even move the net.

I don’t want to get too carried away here; the Warriors still need to win another game before corks can start popping, but there is one more moment from Game 5 that I want to preserve in digital amber before we call it a day. The moment of which I’m speaking came with about 2:02 left in the 4th. I know this because the Cavs had been fouling Iguodala intentionally, which is a valid strategy up until the last two minutes of the game, when a different set of rules applies. Andre had been struggling at the line to say the least, looking suddenly lost, alone on a grand stage, playing a solo in the wrong key.

But when Tristan Thompson went to foul Iguodala one last time, he found Draymond Green blocking his way. The two extra seconds it took him to get around Draymond may have saved the game. Or maybe not – things were going pretty well already. But it was still a sterling display of both teamwork and basketball smarts, and those are two things you can never have too much of.

Game 6 is, um, soon? Jetlag has me a bit disoriented but Operation Find a Way to Watch in London is underway. Wish me luck.