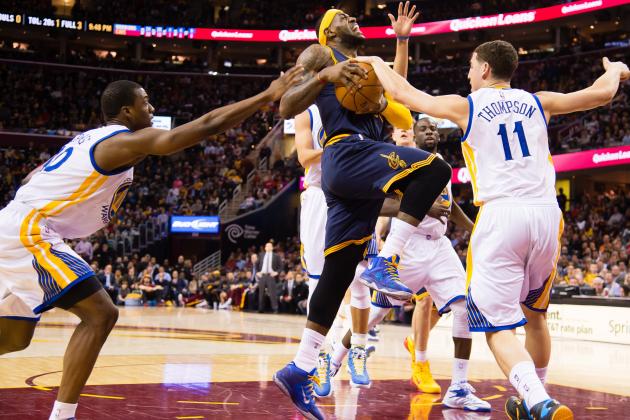 We'll be seeing a lot of this in the next couple weeks.

So everybody wants to know, what do I think will happen in the NBA Finals?

Here’s one thing that’s for sure: We will see a lot of “LeBron vs. Steph” hype, when of course the actual competition is between the Golden State Warriors and the Cleveland Cavaliers. If the MVP and the King cancel each other out, or if LeBron is only a little better, the Warriors win. Hands down. The depth of the two rosters is not comparable.

However: If there’s one player in today’s NBA capable of winning games through sheer force of will, it’s LeBron. He is playing at Jordanesque levels of confidence and focus right now. And he really, really wants to bring a championship to Cleveland. He is a force to be reckoned with, and has motivated his questionably talented supporting cast to play at a level much higher than they appear capable of.

The “questionably talented” part does not apply to Kyrie Irving, who is a phenomenal player but has been hobbled by injuries. If he is healthy in the Finals, that changes the equation somewhat. But the Warriors are still deeper and will be able to bring waves of fresh bodies that the Cavs can’t match.

So I can’t really predict anything, except that:

– Riley Curry will continue to be exceptionally cute
– Her father will continue to be exceptionally good at basketball
– His mother Sonya will enjoy a margarita at one of the games, but will not offer a sip to her pregnant daughter-in-law
– LeBron will dunk and flex his muscles
– The commercial breaks and halftimes will be interminably long
– We will hear that God-awful Black Eyed Peas song at least four more times

OK, OK, fine…you want a real prediction? I predict that I will be on an airplane to London on June 15, and in an ideal world, the Warriors will be world champions by then. Make of that what you will. Now let’s play ball.