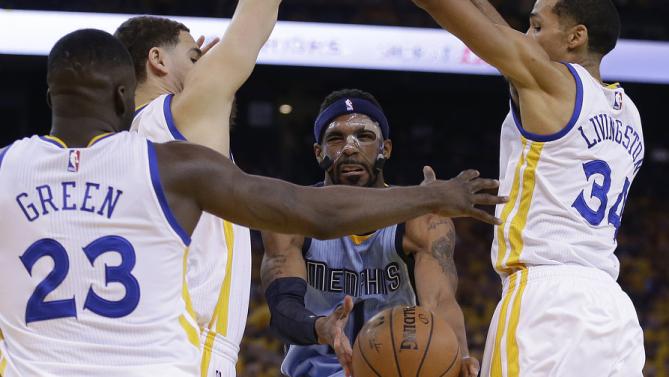 Props to Mike Conley. See you in Memphis.

In retrospect, you could kind of see this one coming. At 7:30 last night, Warriors fans were ogling Steph Curry’s MVP trophy and arguing over where the championship parade was going to be. At 9:00, not so much; our team scored only 39 points in the first half to Memphis’s 50, struggling to adjust to a suddenly inspired Grizzlies defense.

The second half was not much better. Shots were clanging all over the place. Klay Thompson missed a wide-open 3 and an uncontested dunk – on the same possession. Steph Curry shot 2-for-11 from beyond the arc. It was just a bad night all around. Thank heavens for the good people at Sidelines Sports Bar in Arcata, who kept me supplied with enough alcohol to numb the pain of the first Warriors loss this postseason. It had to happen sooner or later, but that doesn’t make it fun.

For all the reasons enumerated above, I’m not feeling especially loquacious today, and I just read an article that says everything I want to say in better language than I’m capable of at the moment. I herewith refer you to:

Game 3 in Memphis is not until Saturday, which gives the Dubs plenty of time to a) stew in bitterness or b) come up with some new ideas. I trust it will be the latter.