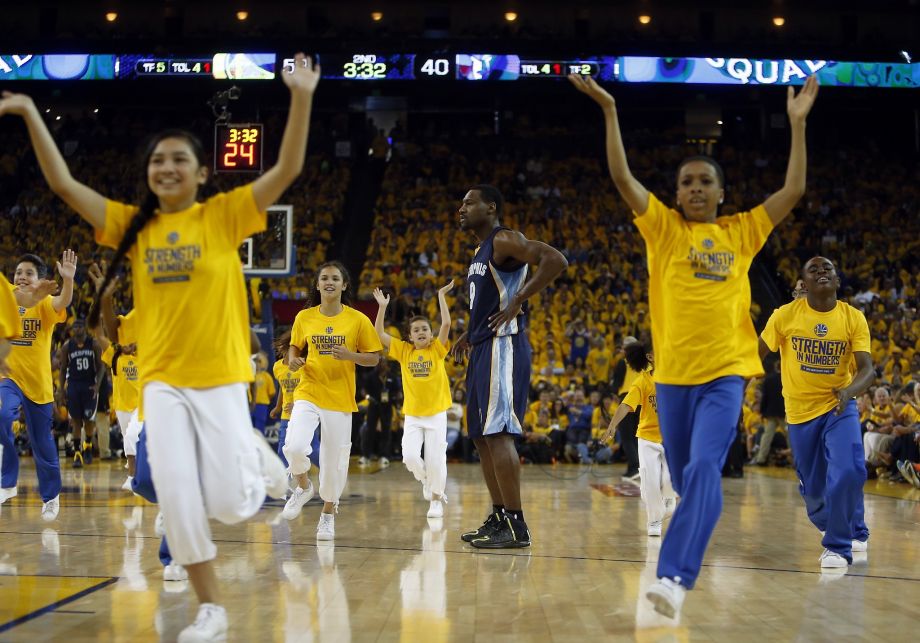 The Grizzlies' Tony Allen looked lost, wandering out onto the court in the middle of a dance routine. He was subsequently booed every time he touched the ball.

The Memphis Grizzles supposedly present a problem for the Warriors, because they are so big and strong down low, but it didn’t look that way yesterday. Memphis bully-boys Zach Randolph and Marc Gasol got theirs, but it was not nearly enough to make a difference. Admittedly, the Grizz were playing without their star point guard, Mike Conley, who recently sustained some facial fractures (and appeared on the sidelines sporting a creepy, blood-saturated left eyeball). But the Dubs were able to pretty easily return everything Memphis threw at them, and served quite a few aces to make the game not really close.

I was on a barstool at Sidelines, settled in for a tough slog, but the writing was on the wall by halftime. One Warriors fan there confessed to me that he was now hoping for a 16-0 run through the playoffs. Yes, we are getting greedy. One game at a time, people, one game at a time.

Today Steph Curry was officially named NBA MVP, surprising absolutely no one with internet access. He had a pretty routine Game 1, scoring 22 points to go with 7 assists, and generally drawing so much attention that the Grizzles’ defense seemed to forget that there were other players on the team. This left people like Draymond Green and Andrew Bogut to roam at will, creating all kinds of wide-open passing lanes. Even Klay Thompson, who you’d think people might want to guard, was sometimes left alone. This is a big part of why Steph is MVP; he makes the players around him better just by being there, making every eyeball turn his way.

No reason to expect that to change in Game 2, which is tomorrow night in Oakland. Conley is not expected to play, from what I’ve heard. It will also be Cinco de Mayo, with Mother’s Day on the horizon; so Sonya Curry will no doubt be enjoying her customary courtside margarita.