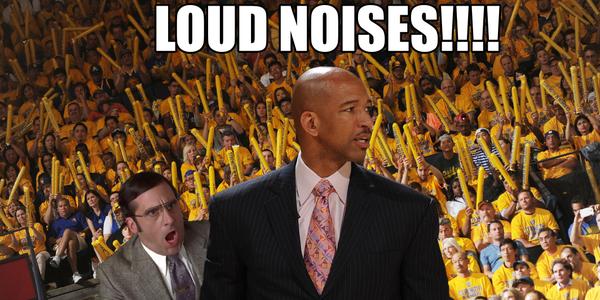 Once again last night the Warriors failed to play up to the lofty standards they’ve set for themselves this year, and once again they escaped with a W.

They looked terrible in the first quarter, making us a tad anxious on Evergreen Avenue, where I was watching my first playoff game at home in many years (thanks to Sling TV). Since relocating to Humboldt County I’ve mostly watched the games in bars, and without the distraction of the bar atmosphere and the alcohol, damn those commercial breaks are long. Especially when your much-favored team goes down 11 in the first quarter.

The subplot getting all the play in this game concerned Pelicans coach Monty Williams, who made some ill-advised comments before the game about how loud it gets in Oracle Arena:

“I’m not so sure the decibel level is legal, and I’m serious…. They’ve done studies on that. For the competition committee, there’s got to be something to that. It does get a little out of hand.”

He later claimed he was joking, but in any case, he had to know how the fans would react to that – by being even louder. I fully expected a blowout that would start in the first quarter behind an energized crowd, but it didn’t work out that way. The Dubs came out flat, and it took an inspired performance by Leandro Barbosa in the second to get them back in it. After that the noise got going and the Warriors started rolling, going up 3 at the half.

I did dishes at halftime, fully expecting my team to come out with one of their steamrolling third quarters. Again, it didn’t happen – they started to pull away, but New Orleans rallied and the game was tied after 3.

Thankfully, the Pelicans seemed to run out of energy in the 4th, and Klay Thompson scored 14 points to put an end to things. The final score does not reflect how close this game was. That’s a little scary, especially since the next two games are in N.O.; on the other hand, the W’s have not had their A-game yet in this series, which should be a little scary for Monty & Co.