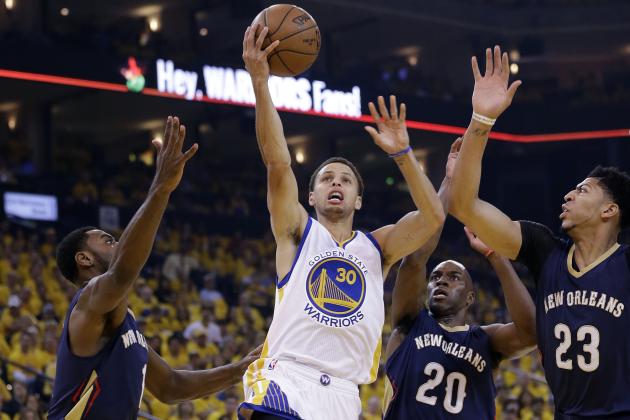 Although the first game of this year’s playoffs had the right result, it was a little disappointing. For the first three quarters everything was just as it should be, with the Warriors slowly building a lead that reached 25 late in the 3rd. But in the 4th they took their foot off the gas and let the Pelicans cut the difference all the way down to 4, leading to some tense moments in Dub Nation.

I was watching at Sidelines in Arcata, after catching the first half at Big Pete’s Pizza. There was suggestion from some quarters that this may have been a mistake, that changing venues when things were going well may have been bad juju. But the W’s had a great 3rd quarter after the switch, so I’m not taking the fall for this one.

Blame can be more appropriately placed on bunch of missed free throws down the stretch, including an uncharacteristic clang by Steph Curry. For most of the game Steph was his usual scintillating self, taking advantage of the Pelicans’ determination to run him off the 3-point line to repeatedly take the ball to the hole. He had some sweet finishes, including a one-handed reverse high off the glass that he sunk despite a hard foul by Anthony Davis.

Davis was playing in the first playoff game of his career, and he struggled mightily for most of the game, but pulled it together to score 20 in the final quarter. He will be a force throughout the series; the Dubs will have to figure out how to deal with him. They’ll also have to figure out how to score while Steph is on the bench, which was a problem last night, causing Steve Kerr to shorten his usual rest in the 4th. Klay Thompson, I’m looking at you; the 6-for-17 shooting and two big misses from the line, these can be forgiven, but don’t let it happen again.

Game 2 is tomorrow night in Oakland. A little more definitive statement from the home team would be nice. Selah.