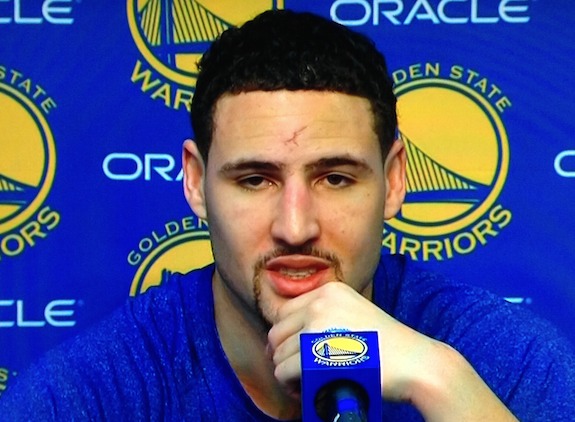 Klay got his Harry Potter scar from a J.R. Smith elbow.

A couple years back, when I was first trying to brainwash my special lady friend into being a Warriors fan, I suggested that she pick a favorite player as a way to personalize the game. She quickly homed in on Klay Thompson, then a raw second-year guard with a huge upside and what looked, to me, like an equally enormous schnoz (she claimed it was “Roman” and elegant). Klay’s fortunes have soared ever since, and this year he signed a $70 million contract extension, started in the All-Star Game, and did this:

Very few NBA players will ever score 37 points in a game, much less a quarter. I unfortunately did not happen to be watching that night, and learned again the hard way that you just cannot miss Warriors games these days, because you never know when something mind-blowing is going to happen. (See also: Curry, Stephen, subject of previous post.)

As for Klay, what I like most about him is his matter-of-fact demeanor. He rarely shows emotion on the court (except when dropping 37 points in a quarter, and really, isn’t that a good time to flip out a little bit?). In a sports world overrun with hyperinflated egos, it’s refreshing to see a guy with superstar skills and a “just-doing-my-job-here” attitude.