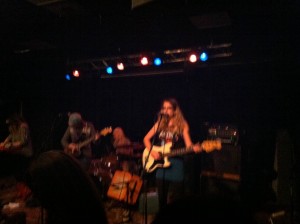 A not-so-great picture of Sallie Ford and her band.

Last night is one that I’d like to remember. It started off shaky but ended up great, and some lessons were learned along the way.

Lesson #1: I really don’t like jazz all that much. Or certain kinds of jazz, at least. As part of a general program to try to shake off old biases and enjoy as many kinds of music as possible, of late I’ve relaxed my strict “no jazz” policy and tried to find a way to enjoy what is, after all, a huge and diverse genre. And I’ve made some progress, discovering a fondness for Miles Davis especially.

So when I saw that the Bad Plus was included in our subscription to the Center Arts season, I was mildly optimistic. They have a reputation as jazz mavericks and have covered songs by the Pixies, Nirvana, and Radiohead. While I haven’t dug deep into their oeuvre, I have heard a few things I enjoyed, and hoped that in a live setting they would do some crowd-pleasing.

But a minute into their set, I knew we had made a terrible mistake. What followed was an extended excursion into the kind of grooveless, tuneless jazz that I detest with extreme prejudice. And if there’s one thing worse than having to listen to this kind of music, it’s having to watch people play it, with their self-satisfied smirks and ironic facial hair. By the fourth “song” I had decided that a better name for the BP would be “The Jazz Assholes.” (Which is actually a pretty good band name, and would fit nicely into my filing system right before the Jazz Butcher.)

What bothers me most about this kind of music is that people seem to think that because it’s hard to play, it must be good. But if it’s not pleasurable in any way to listen to, why bother? I sat there wondering how many people in the audience were actually enjoying themselves, and how many just thought they ought to be and were willing to fake it. I suppose there must be some folks out there who genuinely enjoy this kind of amelodic wankery, and more power to them, I guess. But it looks like I will never understand it, and I think I’m OK with that.

At intermission my beloved and I fled the scene and made our way down the hill to Humboldt Brews, where a rock’n’roll show was scheduled. We had time to see Stephen Curry’s 3 break the hearts of the Orlando Magic with two seconds left on the clock before catching the opening act, a trio called Old Light. They deployed the same weapons as the Bad Plus – keyboards, drums, and bass – but with a very different approach, favoring simple, groove-heavy songs with a new wave (sometimes heavy metal) flavor. This was much more to my liking.

When they were done headliner Sallie Ford, having parted ways with her old backing band The Sound Outside, appeared onstage with her new all-girl outfit and proceeded to rip the joint up. I had not previously been 100% sold on her new album, Slap Back, but the songs sounded great in this context, mixing heaping doses of 60s garage crunch with a little bit of the Breeders.

Sallie herself is a small woman with a big voice, and looked younger than I expected – I mean teenage young, though she started playing with the Sound Outside in 2007, so she must be older than that. Also blonder and more glamorous – in photos she seems to downplay her looks, perhaps being one of those people who’s uncomfortable as a sex symbol. The rest of them were not half-ugly either, and would it be wrong of me to admit that yes, this did enhance my appreciation of the music?

Which, I repeat, was quite excellent, though they did not do my favorite song from the Sound Outside era, “Addicted.” By the time they closed with a tasty version of the Ramones’ “I Wanna Be Your Boyfriend” (without pronoun adjustment), we were fully satisfied and ready for bed.

Lesson #2: Loud rock’n’roll played by four cute girls is better than avant-jazz played by three middle-aged dudes. Any day of the week, and especially on Tuesday.