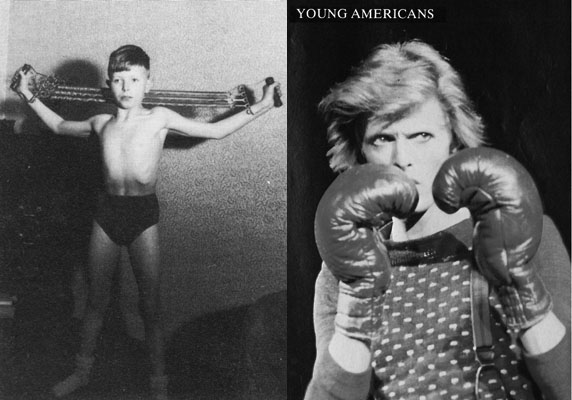 Disc 3 begins in 1975 with “Fame,” which may be the first Bowie song I ever heard; it’s certainly the first one I remember. As with so much of the innovative music of that era that I ended up loving, I initially found it disturbing and frightening. At that point I was not yet a person who controlled his own musical environment; I just soaked up whatever was around me, mostly from the radio, and there was nothing else on the radio like “Fame.” For one thing, it was hard funk when the charts were dominated by soft rock and first-wave disco (funky enough, in fact, that James Brown ripped it off wholesale for a song called “Hot (I Need to Be Loved, Loved, Loved)”). For another, it had that bizarre descending vocal line near the end; surely nothing like it had penetrated my tender young ears before.

But now “Fame” is a comforting old friend, ditto “Young Americans,” which follows it on Nothing Has Changed. Like “Heroes,” “Young Americans” is lyrically ambiguous, to say the least, if not downright grim (consider: “Well, well, well, would you carry a razor?/In case, just in case of depression” or “We live for just these twenty years/Do we have to die for the fifty more?”). But as with “Heroes” that tends to get lost in the sheer sonic bliss and forward momentum of the music. There is a sense here that the Young Americans are maybe not all that bright, that they’ll gladly swallow any poison pill wrapped in tasty candy. And I have to admit I’m right there with them; I love this song regardless.

Next we hear a wash of crowd noise (lifted, I am told, from a live Faces album) and the immortal words “This ain’t rock’n’roll, this is genocide!” For a few lines about “Diamond Dogs,” let me turn things over to Chris O’Leary, author of the excellent — and enormous — blog Pushing Ahead of the Dame, where he is in the process of dissecting in detail every Bowie song ever recorded. Chris?

“Diamond Dogs” has never sounded quite right: a sordid, overlong Rolling Stones imitation, someone else’s nightmare inflicted with malice upon you. As darkly comical as it is menacing, it’s a “classic rock” song overrun by grotesques (amputees in priest’s robes, Tod Browning rejects, various ultraviolences)…. On the radio, it never seems to segue well: it burlesques whatever song it follows or precedes.

If there was ever an irony in dancing to a Stones song like “Brown Sugar,” a party song celebrating slavery, ”Diamond Dogs” raises the ante — on its face, it’s completely unredeemable, a honky-tonk celebration of death, decay and violence. Over the years, it’s become one of Bowie’s beloved standards.

I love the dry irony in the last line there. Only Bowie could make something as freaky as “Diamond Dogs” and convince us that it’s pop music. Next up is the relatively tame “Rebel Rebel,” which quite frankly I’ve never been that crazy about. It’s got a nice riff but goes nowhere, basically running in place for 4 minutes, and its calculated “outrageousness” feels like pure marketing. There are many better songs on Diamond Dogs, but this is a greatest hits package (more or less), so of course “Rebel Rebel” has to be on there.

Pin Ups, the red-headed stepchild of Bowie’s 70s albums, is represented here by “Sorrow.” It doesn’t quite belong, just as Pin Ups doesn’t really connect with the albums before or after it; it would fit better in the chronology somewhere else, say between The Man Who Sold the World and Hunky Dory, but that’s not how it happened. If there must be a song from Pin Ups here, “Sorrow” is a good choice. It has a history (originally recorded by American garage band the McCoys; rearranged and rerecorded by the Merseys, whose version was known to be a favorite of the Beatles; referenced in “It’s All Too Much,” where George Harrison sings the line “With your long blond hair and your eyes of blue”) and it leads nicely into…

“Drive-In Saturday,” which on the surface is as retro as Bowie gets, complete with “sha-la-la”s and a singalong chorus. The only contradictory notes are a few synths and the lyrics, which describe a future world where people have forgotten how to make love and gather at a drive-in theater for remedial sex education in the form of old movies and Rolling Stones videos. (I am not making this up — it’s all there in the song — just ask Chris O’Leary.) Supposedly, before being recorded for Aladdin Sane, this song was offered to Mott the Hoople, whom Bowie had previously gifted with “All the Young Dudes” — which, segue alert, is the next song on Nothing Has Changed, even though it was not released until the 90s (it was recorded in 1972, but shelved in favor of Mott’s version). After that it’s back to Aladdin Sane and “Jean Genie,” which I never mind hearing but probably wouldn’t have chosen; I would have gone for “Panic in Detroit” instead, but that’s just me.

Looking back over what I’ve written here, I realize that we’ve gotten far away from where this thing started: in the car, en route from Arcata to Ukiah. We were somewhere around Laytonville when the opening chords of “Moonage Daydream” kicked in, and you could immediately feel the change in the local energy. There’s just something special about the songs from The Rise and Fall of Ziggy Stardust and the Spiders from Mars, of which there are three here: “Daydream,” the title track, and “Starman.” (“Suffragette City,” amazingly enough, did not make the cut.) I am ever-hesitant to commit to a favorite Bowie album, but Ziggy has an organic alchemical magic that no album by anyone, before or since, quite matches. Unfortunately, it is so of a piece in my mind that none of the songs ever sounds quite right out of context; “Ziggy Stardust” should always be followed by “Suffragette City,” and it in turn by “Rock’n’Roll Suicide.” Anything else is just wrong.

Of the Ziggy songs, “Starman” probably stands best on its own, and on Nothing Has Changed it segues into “Life on Mars?”, which makes for a ridiculous embarrassment of riches. When I heard voices from the back singing along to the “na na na na na”s and then “look at those cavemen go,” I was about as happy as it’s possible for a person to be on this crazy, mixed-up planet of ours. No one could have asked for more, but then on top of that we got “Oh! You Pretty Things” and are you kidding me? “Gotta make way for the homo superior”; absolutely goddamn right.

Everything else is denoument. “Changes,” “The Man Who Sold the World,” “Space Oddity”: great songs all, but they don’t have many surprises left, with the possible exception of “TMWSTW.” Until it was rescued from semi-obscurity by Kurt Cobain, “The Man Who Sold the World” was an album track known only to hardcore Bowie fans, and it’s still something of a mystery; one of those songs where you feel on some intuitive level like you have an inkling of what it means, but once you stop to think about it, it eludes your grasp.

Nothing Has Changed winds down with five increasingly primitive pre-“Space Oddity” songs, starting with the relatively sophisticated “In the Heat of the Morning” and ending with the raw and garagey “Liza Jane,” recorded in 1964 by “Davie Jones & the King Bees.” This is noteworthy because for many years Bowie tried to burnish his mystique by pretending that this era, where he tried out numerous styles in vain attempts to gain a career foothold, never existed. So Nothing Has Changed may not end with David’s best work, but it does leave the lasting impression of a man embracing the totality of what he’s done with his life, and I for one salute him for that.

I will circle back at some point and cover Disc 1, but with 2015 looming, it’s nice to know that David Bowie still walks the Earth and may yet favor us with more music. (His post-The Next Day output has been, um, perplexing; but still.) For now, good night and may the good news be yours. Let’s give the last word to Mr. Jones himself, who recently posted the following message on his website:

Wishing you guys a very happy year-end holiday and we are looking forward to a full, plump but snappy, rather sexy, music-crazy New Year, are we not?