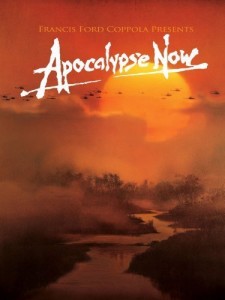 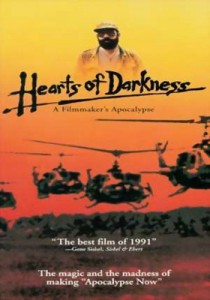 Part of what fascinates me about Apocalypse Now is the story of its making, which is the subject of the phenomenal 1991 documentary Hearts of Darkness. Coincidentally last night I watched an episode of the TV show Community that riffed on this subject, and while I don’t agree with Abed that Hearts of Darkness is better than Apocalypse Now, I do think that the two are really inseparable parts of a larger story.

A story that also involves Orson Welles, who was the first of many to try to turn Joseph Conrad’s novel Heart of Darkness into a movie. Before making Citizen Kane, Welles got as far as preproduction on his version — he was going to play Kurtz — before the studio pulled the plug, nervous about costs getting out of control. Funny, that, considering that Apocalypse Now would become legendary for going gazillions of dollars over budget.

It wouldn’t be out of line to say there seems to be a curse on anyone who tries to film Heart of Darkness. A short list of the obstacles Coppola had to deal with in making Apocalypse Now: typhoons, heart attacks, civil wars, replacing his lead actor in the middle of filming, and of course Marlon Brando (not to mention Dennis Hopper, in the craziest phase of his crazy life). The outcome was by no means guaranteed. “My greatest fear is to make a really shitty, embarrassing, pompous film on an important subject, and I am doing it,” Coppola says in HOD. “And I confront it. I acknowledge, I will tell you right straight from… the most sincere depths of my heart, the film will not be good…. I’m thinking of shooting myself.”

And yet he persevered. I, for one, take comfort in that.

I’ve been sitting here trying to figure out whether I would recommend to the uninitiated that they see Apocalypse — theoretically the text — or Hearts of Darkness, the commentary, first. And on balance I’d probably say the latter. Spoilers aren’t really an issue in Apocalypse Now (hint: we lost the war). But if this applies to you, you need to get busy, and quick.

As do I. I’ve been pondering an approach to this subject for quite some time (in fact most of this post was written in 2011; hence the reference to an episode of Community that aired two and a half years ago). I think that the only way to go is to take it scene by scene and just let it roll.