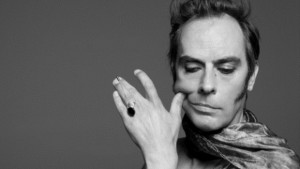 The beginning of the show was not auspicious; “King Volcano” and “Kingdom’s Coming,” two quieter numbers, were marred by technical problems, with Murphy gesticulating irritably to offstage figures. The band members appeared to have an average age of about 19, and the guitar player was brand new, having just learned the repertoire. He had a good haircut, but I did not envy him trying to fill Daniel Ash’s shoes. (Truly, the shoes that no man would want to wear.)

But after that shaky start, things settled down, and we were treated to a nice trio of songs from In the Flat Field. These simpler, rawer songs obscured whatever shortcomings the band may have had, while Murphy — though clearly somewhat weary of voice — shrieked and wailed in his own inimitable fashion. For just a moment it was possible to imagine you were in a dark club somewhere in England in 1980, listening to some weird but brilliant band no one had ever heard of.

•  “Passion of Lovers,” pounded out with gusto by the chubby drummer, who looked as if he were about to have an infarction at any moment.
•  Surprising, and surprisingly successful, dips into “Boys” and “The Spy in the Cab.”
•  The inevitable “Bela Lugosi’s dead,” ridiculous and irresistible as ever. The bassist, whatever his name was, did a superb job reproducing David J.’s slinky line while The Prince of Darkness stood in the back with his reading glasses on, coaxing bat sounds from his phone. Very strange. Very 2013. But highly entertaining.

The show closed with scorching versions of “Stigmata Martyr” and “Dark Entries,” followed by a song I didn’t know which I am led to believe was a Dead Can Dance cover. Then Peter’s personal assistant appeared to inform us that he was sorry but there would be no encores. This irritated me only slightly until I looked online and saw that other, similar shows had been followed by a five-song encore of “Hollow Hills,” “Spirit,” “She’s in Parties,” “Telegram Sam,” and “Ziggy Stardust.” That would have brought the roof down — though to be fair it was a fragile-looking roof — or at least caved in part of my skull, but it was not to be.

Well, on the whole, I can’t complain. Peter could just as easily be in prison now — he had a recent issue with the law in Southern California, which I won’t get into here; if you want you can find all the deets online, including a sad-looking mugshot. Instead I got to hear some songs I love and have a delightful weekend in Napa. Someday I’ll get my encores…maybe at the Bauhaus reunion in Hell.