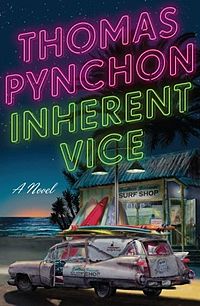 Inherent Vice is more or less a detective novel. The protagonist, private investigator Larry “Doc” Sportello, would have to be described as “Dudeesque” in his investigative methods: By sticking to a very strict drug regimen, he keeps his mind limber and arrives at insights that would elude more linear-thinking gumshoes. Also like The Dude, Doc is a man for his times — in this case the late 60s sliding into the 70s, post-Manson, the decay of hippie ideals already well underway. Though Doc himself is, of course, incorruptible, in the best Chandler/Hammett tradition; just substitute weed for whiskey, and there you are.

Doc’s bête noire is Bigfoot Bjornsen, an LAPD detective and minor celebrity with an addiction to chocolate-covered bananas. Doc and Bigfoot sort of circle each other throughout the course of the book, sometimes friendly, sometimes not, but there is always the sense that they are two sides of the same coin. In Pynchon’s universe there are no heroes or villains, just points along a continuum, points that are always in motion.

But I may be drifting too far here into Serious Analysis. The real selling point of IV for me was that it is fun, funny, fast-moving, and whimsical. This being Pynchon, goofy names, shadowy conspiracies, and mind-expanding prose abound. As do sex, drugs, and rock’n’roll, which can’t help but raise the entertainment value. I recommend it without hesitation, though there will be no money-back guarantees (I swore off those many years ago after the Wild at Heart debacle).

Also noted, in the course of “doing research” for this post (i.e., spending a half-hour reading random shit on the Internet), I discovered that Inherent Vice is being adapted into a movie by Paul Thomas Anderson (of Boogie Nights/Magnolia fame). Were it anyone else, save perhaps the Coens, I would find this a cause for apprehension; with PTA I am cautiously optimistic, thought the casting of Joaquin Phoenix as Doc does not inspire confidence.

What the hell, though, it’s 11:11 AM, I’ve just had two cups of good strong coffee and a piece of birthday cake, it’s the right time to be hopeful. Maybe the movie will be great. Maybe Pynchon will make a cameo, à la the Simpsons. Then I’ll recognize him next time I see him down at the wine bar and we’ll become best pals. This is the mood Inherent Vice has put me in — all kinds of crazy shit suddenly seems possible, and I’d like to thank Mr. Pynchon for that, preferably in person.