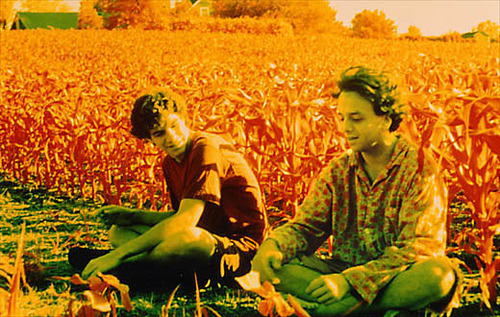 This is Ween country.

For some reason I’ve never written a word that I can remember about Ween, even though I have all their albums, give or take. There’s something intimidating about them as a subject; like their forebears the Bonzo Dog Doo-Dah Band, they could technically be classified as a “joke” band, but within that joke is contained infinitely more truth, complexity, and demented genius than 99% of “real” bands will ever glimpse.

The biographical facts are simple enough: Ween was (or is, see below) a core duo of Gene Ween (Aaron Freeman) and Deen Ween (Mickey Melchiondo) augmented by various additional band members who came and went. After self-releasing some homemade cassettes in the late 80s, they unleashed their first album, GodWeenSatan: The Oneness, on the public in 1990. Over the next 17 years they were responsible for ten studio albums, numerous official and semi-official live albums, and a whole raft of demos, MP3s, and other flotsam and jetsam.

The Ween aesthetic, on the other hand, is hard to explain. It began as an unstable genetic splice of the Butthole Surfers and Prince, but mutated from there into something completely unique. Their special gift was to adopt some particular genre or style, theoretically in order to make fun of it, but to get so far inside it that their satire became virtually indistinguishable from the thing itself. And their sense of humor, which started as a fairly crude sort of college-stoner shtick, grew so dry and refined that at times it was difficult to spot the joke at all. When this happens the lack of a joke then becomes part of the joke, causing an infinite regression that can lead to dizziness and fainting spells.

This morning, for instance, I was listening to the song “Your Party,” which goes as follows:

I was calm when we arrived at the party
I spoke with fervor, embracing the evening
My wife leaned over and she whispered ‘I love you’
I held her close – we danced

Later on when we were under the covers
I closed my eyes, then I drifted to sleep
I dreamt about me maybe throwing a party
And just how great that would be

Now I ask you, is there anything funny about that? Nothing I can see, and yet you couldn’t exactly call it serious either. The overall effect is quite disorienting and slightly unnerving. (It is quite a catchy little tune by the way, with a sizzling sax part provided by David Sanborn of all people.)

As Exhibit B, let’s look at the song “Fluffy,” from Ween’s country album 12 Golden Country Greats:

Fluffy, furry buddy
Chewed his leg on the porch
Why’d you do it Fluffy
On the porch?

Good dog Fluffy
Old friend, my pal
Fluffy’s got his buddy
On the porch

Penny, she’s my girlie
She sits here with me, on the porch
Oh Penny looks so pretty
On the porch

The tone here suggests one of those 70s songs where the horse dies, so you start to think maybe something awful is about to happen to Fluffy, but it never does…the only note of overt discord comes when the “pig” (is this a police officer, or a literal pig?) says to get Fluffy back on the porch. And then Fluffy gets back on the porch. And that’s the end of the song. What?

Not many people have the guts to even attempt that sort of thing, and from all appearances Ween won’t be doing it anymore. Last year Aaron Freeman announced that he was “retiring” Gene Ween and leaving the band, saying, “Becoming an out of control drug addict and alcoholic is my own fault and I take responsibility for it. I HAD to leave the Ween organization to stay sober.” Around the same time he released a solo album, Marvelous Clouds. (It is worth noting that Marvelous Clouds, which consists entirely of Rod McKuen covers, is very much in the Ween tradition, walking a delicate line between homage and parody. It also contains another, in many ways similar, song about a dog, “Mr. Kelly.”)

Dean/Mickey, however, was hearing none of it, rebutting:

I can only speak for myself, but as far as I’m concerned, as long as Aaron and I are both alive on this planet, Ween is still together. We’ve never broken up. The idea of quitting is just laughable. This isn’t something you can quit. This is a life sentence.

So who is right? We shall see. Certainly a Weenless world is a more mundane world, so let’s hope for the best.