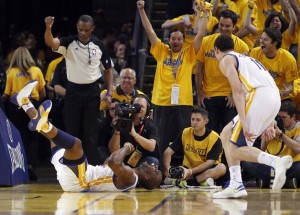 You might not think so, but Carl Landry is very happy in this photo.

It’s another happy day in Warriorland, but I think that what many of us are feeling is more akin to relief. Our boys did indeed win Game 6 of their series against the Denver Nuggets last night, advancing to the second round of the playoffs. But they did so in the most terrifying way imaginable, taking an 18-point lead in the 4th quarter and leading us to believe it was Happy Happy Fun Time, then committing turnover after turnover (or throwing the ball all over the place, as coach Mark Jackson put it) and coming within a hair’s breadth of pissing the game away.

But in end the the Dubs prevailed, 92-88, and there was much rejoicing in the Nation. I would like to personally here in public express my gratitude to Andrew Bogut, who had the game of his life when we needed it most, and Draymond Green, the unflappable rookie who repeatedly saved his teammate’s asses.

Also Carl Landry, who was his usual solid-as-a-rock self, and Stephen Curry, who had another one of those crazy third quarters (3 is a magic number for Steph, apparently). And hell, the whole Warriors team, who have brought me and mine a lot of joy over the last couple weeks after it looked like they were down for the count.

Up next are the San Antonio Spurs, an elite and well-seasoned team who have always had our number. Well, who knows…when you believe anything is possible, right?