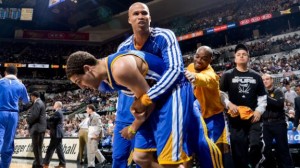 Richard Jefferson gives Klay Thompson a hug for all of us.

These are exciting and turbulent times in the Warrior Nation — our team has made history twice already this week. First it was the bad kind of history, where they blew a 16-point lead with less than four minutes left in regulation, then lost to the San Antonio Spurs in double overtime. Some of us, and I’m not naming any names here, thought that would crush the spirits of the young men who get paid millions of dollars a year to play basketball with a picture of the Bay Bridge on their chests.

Well surprise, surprise: Last night in Game 2, the Dubs again ran out to a big lead — this time behind the sizzling hot shooting of Klay Thompson — but this time they did not fuck it up. They did make things interesting along the way. As their lead dwindled in the 4th quarter, at one point I glanced around the bar and saw a fellow fan huddled into a corner like an abused puppy afraid of being hit again. But in the end they had enough heart to hang in there, and they ought to love themselves for that.

This was historic because it broke a 30-game losing streak for the Warriors — it was the first time they had won in San Antonio in 16 years, and the first time Spurs senior citizen Tim Duncan had lost a game to the W’s at home. As someone who had watched many of those 30 games, I don’t mind telling you, it felt really good.

Now the series is tied 1–1 and the next two games are in Oakland. A promising situation, but for the record, I’m taking nothing for granted. The Spurs are a great team, and the world of sports is capricious, and the W’s are still playing shorthanded, etc. etc.

But still — this is one of those golden moments that reminds sports fans why we do it, why we suffer through painful seasons and changing lineups and irritating commentators. Because a team that plays together and with inspiration can do things that seem impossible. Right? Right.

← Waiting to exhale ← Let It Ride