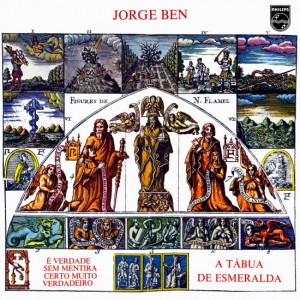 So I started seeking out Jorge Ben albums, starting with his 1969 self-titled release, and each one got better and better, with Ben slowly adding elements of soul, funk, and rock to his foundation in traditional Brazilian music. Recently I arrived at 1974* and A Tabua de Esmeralda, which is a mind-blower for sure — right from the studio chatter that precedes the first track, which sounds mysteriously like a piece of dialogue from my own life circa 2002.

The album kicks off with “Os Alquimistas Estão Chegando,” which The Google translates for me as “The Alchemists Are Coming.” That seems straightforward enough, but even in English many of the lyrics here remain opaque to me, reliant as I am on clunky machine translators (till I learn more languages or the Babel Fish is discovered, whichever comes first). “A Tabua de Esmeralda” translates, I am told, as “The Emerald Tablet,” and is a reference to the sacred texts that form the basis of Hermeticism — and very quickly here we get to a place where I feel out of my depth, possessing as I do little understanding of Hermeticism, or Portuguese, or any number of other things perhaps requisite for optimal comprehension.

But while the details remain murky, the overall impression I get is that Jorge Ben, under the influence of who knows what — meditation, heavy drugs, Brazilian booty, or some form of the voodoo that got Lee Perry around this same time — has had his mind blown; gotten some Total-Perspective-Vortex-like glimpse of the sheer scale of the mysteries of the universe and entered into an extended state of intoxication that expresses itself, in his case, as music.

Some people are damaged by this kind of transmission. The name “Philip K. Dick” leaps to mind…PKD spent the last years of his life struggling to shape the insights of his religious experiences (and/or strokes) into a form that would make them comprehensible, and suffered greatly in the process. A blown mind seems to suit JB very well, though…long stretches of A Tabua de Esmeralda pass in a blissful, ecstatic trance. Consider “Errare Humanum Est,” — Latin for “to err is human” — a lush, dreamy number that ponders “Whence/Our momentum/To probe the space?” and asks “Were the gods astronauts?” Or “Brother,” the only song here for which translation is not a problem, as the lyrics are entirely in English; it is a testament to Ben’s genius that when I listen to it, I reflexively find myself singing “Jesus Christ is my Lord, Jesus Christ is my friend,” though I don’t necessarily believe either of those things — sort of like Jesse Jackson once got me chanting “Up with hope, down with dope” before I even knew what I was saying.

In addition to Jesus and ancient astronauts, there are references to other galaxies, Thomas Aquinas, Gato Barbieri, zombies, and of course Hermes Trismegistus himself, who wrote the tablets “with a diamond on a blade of emerald.” (Says Translate, anyway; I am suspicious of the word “blade” here. But quite frankly I am in no hurry to clear up all the mysteries of A Tabua de Esmeralda. This album is almost 40 years old, and it ain’t going anywhere; if it continues to slowly unfold its secrets over the next 40 years, that’s OK with me.)

Musically, A Tabua de Esmeralda is a lovely mixture of acoustic and electric guitars, strings, drums and percussion, and of course glorious human singing voices, primary among them Ben’s, which is far from virtuosic but has a warm, friendly quality that is tremendously soothing. I should stop myself here because I am not going to have much luck finding words that express the pleasure of listening to this album; I encourage you to seek it out and have a listen, while reclining on a hammock in the sun with a beverage at hand, or twirling slowly in a dark room with someone of whom you are quite fond, or perhaps in your sleep chamber on an interstellar spaceship…any of those would be good.

* Also the year of Diamond Dogs, It’s Only Rock’n’Roll, Natty Dread, Standing on the Verge of Getting It On, Country Life, and Taking Tiger Mountain (By Strategy).