The Best Liner Notes Ever 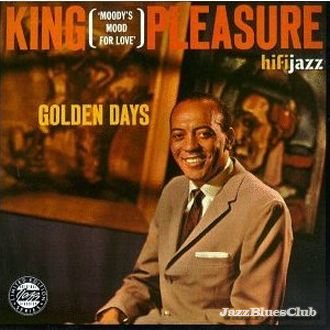 A little while back, I can’t remember how, I stumbled across a reference to a musician named “King Pleasure.” And of course I had to learn more. Here is a quick summary of what I discovered:

King Pleasure was a jazz singer who was born Clarence Beeks (children of the 80s, take note: this was the name of the shady character in Trading Places who leaks the annual orange report and ends the film being buggered by a gorilla). He was one of the pioneers of a style called “vocalese,” where a singer takes an existing instrumental solo and turns it into a vocal melody with words.

I’ve heard some of it and it’s not really my bag; but there is no doubt that the King himself was a remarkable personality. According to the liner notes of Moody’s Mood for Love,

The story I heard was that his name stemmed from his activities as a performer in sexual exhibitions…. While still at [the record label] Prestige he put together a club act, complete with a “massive, purple, swiveling throne” and “a special mike…built into the throne’s arm,” as described in the July 1954 issue of Metronome.

Those liner notes are pretty good, but they are not the Best Liner Notes Ever; that distinction belongs to King Pleasure’s own notes to his 1960 LP Golden Days. And I quote:

My real name is Clarence Beeks. My professional name of “King Pleasure” is by selection as strange to me as the sudden “revelation” that occured to me in my sleep and woke me upright at the age of six in Oakdale, Tenn., my birthplace.

The Revelation was that I was the real saviour of humanity. And that I was a baby planet nucleus! Of all the thoughts that this alive, and at first frightening impression has brought into being since then, the most distinct effect that it had was to make my life one of an interpreter (philosopher) of existence — structure and function generally and of things and individuals and events specifically. This is the fact that accounts for my being in show business….

For the last four years, I have been formulating a new philosophy called Planetism — the ultimate “ism.” I am now preparing to set down the philosphy — the How, When and Where. But, presently, since I deem my findings to be so important to humanity, I would like to express the What I have found, briefly and in general terms.

1. That this is a charged-neutral material existence.
[table id=2 /]

2. People are in ideal and physical metamorphosis (evolution) to a planet satellite (moon) — the second Earth satellite. (The moon has been through the stage of metamorphosis known as humanity.) This is the relative purpose and intelligence of humanity.

3. People do not have to die. Life and death are matters of general adjustment (union) and maladjustment (separation). The idea that death is inevitable is the concept of the death (mal-)adjustment. “(As the mind goes, so goes the body.”)*

4. The individual part, or self (selfishness) nature of people is their animal nature encompassed within an animal — immoral (mal-)adjustment — (the adjustment of death) — the chief characteristic of which is the spirit of separation and selfishness.

5. The whole, human genus or kind (kindness) nature of people is their planet nature encompassed in a planet moral adjustment of life, the chief characteristic of which is the spirit of oneness.

6. The only sin is selfishness. The wages of sin is Death! But the gift of “God” is eternal life. When a man strikes a man he strikes against life for all humanity. For when there is an injury or illness in an individual, there is illness and injury in humanity. All trouble among humans starts with selfishness. Selfishness is the source of all illness within humanity, all diseases, all death.

Pro-life, pro-union, pro-wisdom, pro-gress dedicated to reproducing a planet of people and to freedom of sex from its present misconceived, maladjusted, neurotic, psychotic, concealed, guilty, anxiety-ridden and “shameful” curse status, and exalted into its proper perspective of divinity, life, wisdom, union.

8. The absolute form (the opposite of, and hence, relative to, the relative form) of existence, which people call “God” and which has all of the virtuous attributes heretofore attributed to “God,” is space.

In man’s search for what “God” is, on the one hand, he has missed all knowledge and is as yet as ignorant as ever in this relation, simply because, on the other hand, he has negatively and negligently called it “nothing” — in relation to, and by comparison with the “something” form of which he is a member — a conceited misconception which leaves the greater part of his mind with a vacuum inactive, a NO registration impression of and for the greatest part of existence — space, which is generally united and neutral, infinitesmal matter of hydrogen gas particles frozen to absolute zero (nothing) and hence is also coldness, darkness, smallness and lowness (of pressure): it is general magnetism (nuclear; nucleus). It is not externally charged and therefore it makes no impression upon senses keyed to pick up externally charged impressions. And by comparison with the charged, or “something,” form, it is called no-thing.

Space is perfect (one, same, complete, throughout, etc.).

Space is nucleus around which all “matter” gathers.

All things come from “nothing” (space). It is the medium of differentiation and distinction between all things. Space comprehends and opposes all things. It is reflection (mind, wisdom, etc.).

ALL things exist, live and react in relation to space.

* The chemical potential of perpetual life has been observed by Dr. Linus Pauling, Nobel Prize–winning chemist, Dr. Hans Selye of Montreal, and other prominent scientists.

That is quite a spiel. Now the whole thing, I’ll grant you, has that feel of being written by a guy who’s out of his gourd, whether from sex, drugs, haywire brain chemistry, or some combination of the three. And yet, and yet…I implore you…read the whole thing and tell me: Is he wrong?