The Best (Worst) Product Review Ever 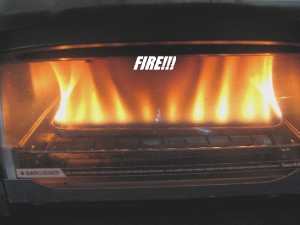 Awhile back, in the course of doing web research on toaster ovens for my mom, I came across the best product review ever (that is, most amusing; it was not a positive review of the product in question, to say the least). Then I promptly forgot about it. Now that I am in the market for a new toaster oven myself, I happened to look up the models available at Eureka’s Target (where I seem to be spending an alarming amount of time), and lo and behold, there it was again.

The product in question is the Black & Decker TRO490W Toast-R-Oven Classic 4-Slice Countertop Oven, White. The Amazon page for this baby is like nothing I’ve ever seen. It is full of one-star reviews with headlines like “Good product if you want your house fumigated,” “Dangerous!! Almost burned down my kitchen,” and “Fire hazard!!”

Apparently, the TRO490W has a few problems. Here are some excerpts from the reviews:

Holy Cow! Bought this toaster oven today at a local store on sale. Took it home, unpacked it and made a single piece of toast. An hour later (LONG after the oven had cooled down), we heard a crash in the kitchen….the entire glass front of the oven door had shattered! Hundreds of sharp glass shards everywhere on my counter and floor, what a mess!

The automatic timer was stuck; it kept toasting and toasting the pita bread until (when I realized the whole kitchen was ambushed in thick smoke) it was charcoal. The toaster itself – the glass front is completely blackened and so is the top edge of the white toaster.

This morning, the glass door on the front spontaneously exploded/shattered into thousands of glass shards, sending glass flying everywhere. Thankfully, my four small children are all ok.

Stuck a piece of bread in the unit, set it to “toast” mode, and then the next thing you know, the piece of bread caught on fire! There was smoke all over the kitchen which set the smoke alarms off.

But those are just warmups for The Best Review Ever, which was written by someone calling themselves “Annietown.” I can only do it justice by quoting it at length. Does fair use apply to something like this? I’m not sure, but let’s have a go:

Perfect for arsonists, pyromaniacs, and general fire enthusiasts
January 29, 2012
By Annietown
I take toast very, very seriously. It is my favorite food. I have been looking for a toaster oven that can toast exotic items like bread. Turns out, the people at Black & Decker do not want me to make or eat toast.

This toaster oven toasts incredibly well. Incredibly. Well. In fact, it will toast your entire kitchen. With fire. This toaster oven actually takes bread and turns it into fire. It is a magical machine, full of mystery and wonder. If you love fire and toast, then this is the appliance for you. If you like to stay warm by the glow of a fire, then this is the appliance for you.

3. Extinguish. (Not with water though, that causes other problems, including, but not limited to, your toast being soggy)

It’s pretty easy to use, except for step 1 which requires the use of a phone, which Black & Decker does not make, which is probably good because I don’t like fire to be too close to my ears.

The con of this toaster oven is that it catches on fire.

The pro of this toaster oven is that it catches on fire.*

*Note this is a benefit only if you are a fire enthusiast. Otherwise, this toaster only has cons.

This toaster is not suitable for children or pets.

This toaster is not suitable if your kitchen contains anything flammable, such as furniture.

This toaster only comes in white but will turn black or brown after a few uses, so don’t worry about the lack of color choices. Black matches everything.

The oven door does not close very easily.

It has a blue light, I guess that’s cool.

And then EEEEEKKKKK FIIIRREEEE!!!! PUT IT OUT PUT IT OUT BUT WAIT FIRST LET ME TAKE A PICTURE SO I CAN POST IT TO MY FACEBOOK.

Amazingly, despite the near-unanimous opinion that this is not just a shoddy product but a genuine hazard to life and limb, it continues to be manufactured and sold. There are several ways to look at that, but I choose to see it as a salute to the heedless courage that made this country great. Hooray for America!

← Fine, thanks for asking ← Here We Go Again