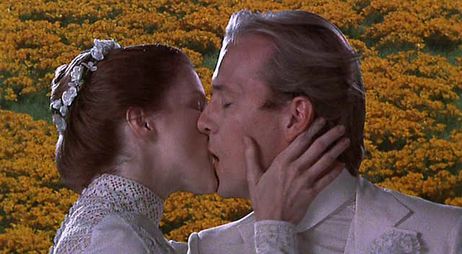 As Emily Jessup, Brown is utterly crucial to this movie’s credibility, such as it is. Not only do you believe that she is an anthropology professor who just happens to look like a movie star, you believe that she loves Eddie despite his being a singularly difficult person to love. She does as good a job as humanly possible of delivering lines like this:


Even sex is a mystical experience for you. You carry on like a flagellant, which can be very nice, but I sometimes wonder if it’s me that’s being made love to. I feel like I’m being harpooned by some raging monk in the act of receiving God.

She alone gives us a rooting interest in this film. Without her, Eddie would just be some narcissistic egghead who loses his shit in pursuit of Ultimate Truth. Without her, he would be lost to his fate, and he would deserve it.

Let the truth be told: I am a sucker for a love story when done right, and sometimes even when done wrong. Altered States‘ final scene, where Emily helps Eddie fight his way back from some kind of cosmic disintegration, still has a 50/50 chance of putting a little tear in the corner of my eye.

That’s not the only reason I’m sentimental about Altered States, though; it’s also because I associate it with my Old Man, who took me to see it in the theater even though I was probably too young. On the plus side, I got to enjoy Blair Brown’s breasts before any of my peers; on the minus, I had nightmares for a few days; but on the whole the experience no doubt helped shape my brain into the, um, unusual instrument it is today. So thanks, Dad. I guess.