Movie of the week: “Alien” 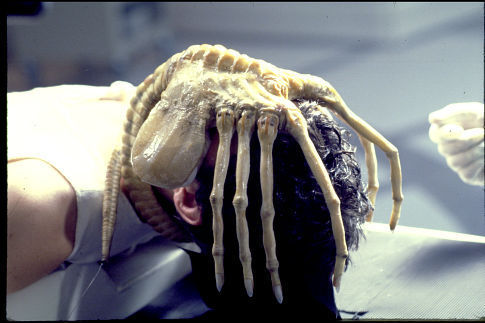 What with today being Halloween and all, this seems like a fitting time to get into Alien, a legitimate contender for Scariest Movie Ever Made. (The other contenders, in my book: The Thing and Invasion of the Body Snatchers, and possibly one or more Cronenberg movies — although those are almost in a whole different category — Le Grande Mindfuque, something like that.)

Back in the late 90s, my girlfriend’s daughter — who was maybe 10 at the time — had seen Aliens (the second movie) and thought she was all big and bad and tough. So at her request we arranged a viewing of the original, and she barely made it past the opening credits before we had to turn it off. Alien is just that pure and perfect a horror movie: Even before anything happens, it is scary as hell.

Over its first half-hour, Alien builds slowly, slowly — setting up the time, the place, the situation, the personalities, even the class politics involved. The creep meter gets ratcheted up very gradually, and by my count it is not until the film’s 36th minute that some freaky thing explodes out of an egg and attaches itself to John Hurt’s face. And from that point on, things begin to evolve….

More on this later.

← Just for the heck of it: the slow loris ← “Alien,” continued