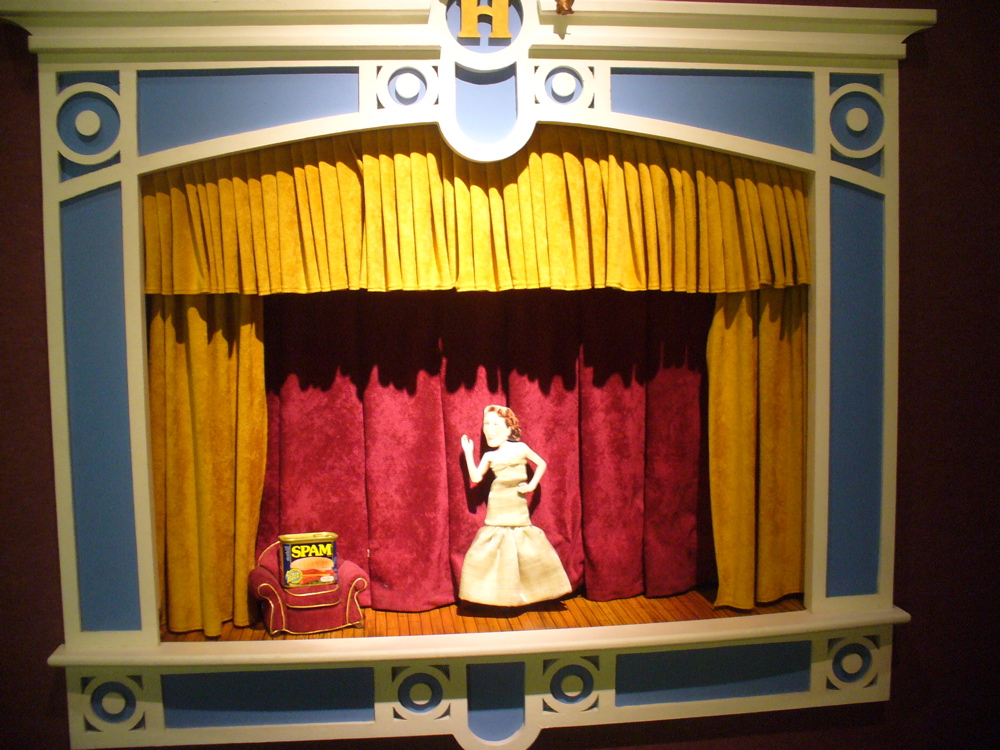 Our last stop on the way out of Minnesota was the Spam Museum in Austin, MN. In general I consider myself a recovering ironist, but one’s appreciation of such an institution must of necessity be somewhat ironic, and the museum seemed to encourage this. The famous Monty Python Spam skit was given prominent play, complete with a full-size reproduction of the diner where the sketch was set. On the other hand, the common usage of the word “spam” to refer to unwanted email was nowhere mentioned; apparently Hormel Foods’ sense of humor only goes so far.

On the whole, though, I must doff my cap to the Spam Museum; it is a true triumph of modern marketing, and achieved its goal of getting me to reconsider my whole attitude toward Spam. The samples of a black-pepper-flavored variety they brought around were not bad at all. I am considering investing in a sizable stock for my emergency kit; there could be worse things to eat when the end times arrive.

On the Road Again

I’ve been spending some time lately in Real America, including a sojourn with The Old Man through two previously-unvisited-by-me states, Wisconsin and Minnesota. More on that later. But at the same time I’ve been traveling through a hot, wet American summer, I’ve also been traveling through 1970s Germany in the dead of winter, thanks to Werner Herzog’s book Of Walking in Ice.

Why did Werner decide to walk from Munich to Paris in late 1974? As he explains in the foreword:

In November 1974 a friend called from Paris and told me that [esteemed film critic] Lotte Eisner was seriously ill and would probably die. I said that this must not be, not at this time, German cinema could not do without her now, we would not permit her death. I took a jacket, a compass, and a duffel bag with the necessities. My boots were so solid and new that I had confidence in them. I set off on the most direct route to Paris, in full faith, believing that she would stay alive if I came on foot. Besides, I wanted to be alone with myself.

Which reminds me of the immortal words of Geo. Thorogood:

So where am I going with this? Right now, nowhere. Just clearing my throat, trying to get the machine going again after a long idle spell. It’s a beautiful night in Kansas, the air calm and cool after the rain, insects buzzing and occasionally even lighting up, fireworks going off in the distance now and again. It’s the 4th of July here as of four minutes ago. How to celebrate? Perhaps I will go watch infomercials till dawn.