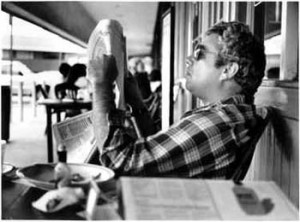 Mike Watt: a gentleman and a school bus. Also a tugboat.

Embarrassing but true fact: The first time I saw Mike Watt perform, I had only the vaguest idea of who he was. The year was approximately 1992, and my friends had convinced me to go with them to see a band called fIREHOSE, for whom Watt played bass. I knew the broad outlines of his story – that he had been in the Minutemen, who had come to a tragic end with leader D. Boon’s death in a car crash, and had quit music for some years before being cajoled out of retirement by fIREHOSE singer Ed Crawford – but I did not know at the time that he was an Important Figure. Almost everything about that show has been lost in the mists of time, though I do remember that as an encore they did a cover of the Butthole Surfers’ “Revolution, Pt. 2” – the one that ends with a chant of “Garry Shandling, Garry Shandling” – and that this made me very happy.

Fast-forward to 2011. fIREHOSE broke up not long after I saw them, and in the intervening years Watt has released a number of solo albums, including one (Ball-Hog or Tugboat?) that got a big push from a major label and even some radio play. Every one since then has been increasingly esoteric and low-profile, though not necessarily in a bad way. Watt was never at home in the Long Plastic Hallway.

So last night a group of those same friends and I got our middle-aged butts in gear and made the trek to Bottom of the Hill to see Watt perform his latest opus, Hyphenated-Man, a 30-song, 47-minute autobiographical “punk opera.” There were many travails along the way. We lost one of our number, Mr. X, to unspecified complications before we even got started. When we finally took up our places along the rail at BOTH, it was after 10:00 and there were two opening acts still to go.

The first one, Liquid Indian, turned out to be one guy with an acoustic guitar and absolutely no songs. For about a half-hour he thrashed away at a series of open chords with great enthusiasm but no direction. It was truly awful. Between sets a big, nervous, crazy-looking guy insisted on showing us the size of his forearms, but fortunately no unpleasant incident touched off.

The second opening act, the cleverly named Electric Chair Repair Co., seemed more promising at first, kicking off with a Joy Division-ish drone that was not unpleasant to listen to. But pretty soon they started to suck too, and to do it much louder than the other guy had. I only ask opening acts to be one of three things – good, quiet, or brief – and the prospects for that were not looking good.

Then something strange happened. A bearded, bleary-eyed figure appeared at the side of the stage; we all braced ourselves for what looked like it was going to be a confrontation with a hobo who had somehow gotten into the club. But no: it was Watt, who had been napping backstage and still had his sleep mask pushed up on the top of his head. This is probably not so, but I got the impression that he was sleepwalking, called forth from his place of repose by the bassline of the Stooges’ “Fun House.” He picked up a microphone and started to sing, or at least vocalize, and the transformation was amazing; for the five minutes or so that Watt was on stage with them, the Electric Chair Repair Co. stopped sucking, sounded like a real band with a purpose for existing. And then Watt was gone, either back to bed or to procure his evening coffee, but unfortunately the ECRC continued on for some interval that I can only describe as interminable.

But never mind all my kvetching. Once Watt and co. hit the stage, all was forgiven. They launched headlong into Hyphenated-Man, navigating its myriad twists and turns with stunning energy and precision. Then, after a brief conference at the back of the stage, they returned to perform some Minutemen songs and another, longer version of “Fun House,” for which they were joined by actual Stooges saxophonist Steve Mackay. It was not a long set, maybe 75 minutes altogether, but it was a pretty fucking great one.

Charles Frank Black Francis Thompson once said something to the effect that people don’t really pay to see a rock concert; they pay to see someone believe in himself for 90 minutes. In Mike Watt’s case, I think it’s more like we pay to see a man love his job. You rarely see a human being so happy as Watt was as he thumped his “thunderstick,” as he likes to call it, and “spieled,” as he also likes to call it. The word “inspirational” would not be out of line, especially when you consider that despite advancing age and less-than-optimal health, Watt is still humping it around the continent in a van, playing a show in a different city every damn night.

I probably won’t see Watt again for a while, unless I win the lottery and go to Europe to see him play with the Stooges this summer. But it’s good to know he’s out there, jamming it econo for all of us. I for one take comfort in that.

← This Week in Doublespeak ← Thought for the day