The Fall: “Your Future, Our Clutter” 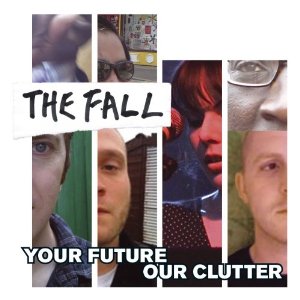 I don’t know how Mark E. Smith does it. Since the Ford administration he’s been the leader of a band whose distinguishing characteristic is forward motion – always changing sounds, always changing members (with MES the only constant), always recording, always touring. Sonically, too, their signature is relentless drive – they find a groove and hammer it until they’re done with it, however long that takes, with Smith not so much singing as spewing his opinions on, well, pretty much everything. He’s probably said something about you and/or your mother at one point or another.

I’ve always assumed speed was a factor; MES has made no secret of his fondness for amphetaminic assistance, with this lyrical snippet being only one example:

But speedheads tend to burn out fairly quickly; how do you keep that shit up for 30+ years? Perhaps Smith’s recently released autobiography, Renegade: The Lives and Tales of Mark E. Smith – another one I intend to tackle post–Infinite Jest – will reveal the secret. Meanwhile, to the task at hand: the Fall’s latest release, as of today, Your Future, Our Clutter.

This is, in fact, a Fall album. It’s filled with tense, repetitive grooves over which MES intones his cryptic vocals-uh. Nothing here is going to make Fall fanatics lose their faith, nor is it going change the minds of those who just don’t get it. There are a few surprises, though, mostly toward the end. “Chino” finds Smith asking:

Is he contemplating retirement? Em, maybe…maybe not. The rest of the song goes on to ask things like:

So, as usual, it’s pretty hard to say exactly what he’s talking about.

The next-to-last song is a version of “Funnel of Love,” a 1961 Wanda Jackson tune previously covered by Southern Culture on the Skids and the Meat Puppets. This is about as close as the Fall come to actual pop music, right up there on the accessibility scale with their previous covers of “Victoria,” “Mr. Pharmacist,” and “There’s a Ghost in My House.”

Perhaps most surprisingly, the last track, “Weather Report 2,” appears to end with Smith repeating the phrase “You gave me the best years of my life” and sounding like he means it. You might begin to think the man has gone soft. But then he is slowly drowned out by a distorted drone and returns muttering something about ice rinks and whirlpools, and complaining that “Nobody has ever called me sir in my entire life.” The song stutters and glitches for a couple minutes before ending with:

* And this is precisely the type of information for which I’m happy to rely on Wikipedia, cause if it’s wrong, so what?